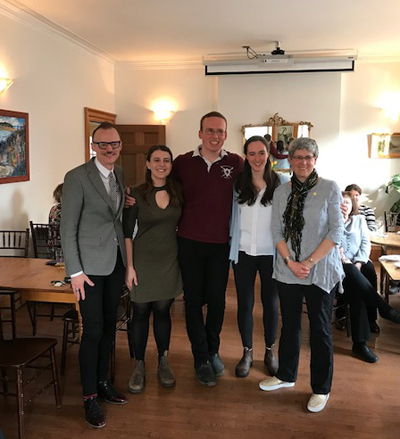 Two Mount Allison University students and one recent alumnus were honoured for their contributions to the community with the Sackville Rotary Club’s 2019 Paul Harris Awards.

Fourth-year students Katherine Reiss and Elise Vaillancourt, along with 2018 graduate Colin Robertson were recognized at the organization’s March meeting. Reiss and Robertson are Mount Allison’s 55th and 54th Rhodes Scholars respectively while Vaillancourt is the current Vice-President, Student Life, and incoming Vice-President, External Relations for the Mount Allison Students’ Union. All three are long-time volunteers with the Rotary Club and Rotaract, the youth branch of the international organization.

Reiss, Robertson, and Vaillancourt have worked tirelessly in the community during their time in Rotaract. The three each served as President of the Rotaract Club, Colin in 2015/2016 and 2016/2017, Elise for 2017/2018, and Katherine for 2018/2019. Their contributions also included volunteering with the breakfast program at Marshview Middle School and the afterschool program at Dorchester School, Rotary Breakfasts, the annual Student Welcome Corn Boil, unloading the food bank truck weekly, and organizing fund raising events for community groups and organizations.

“I am incredibly humbled and honoured to have received this award. For the past four years I have had the absolute privilege of working with wonderful members of the Sackville community as well as my fellow Rotaractors,” says Reiss, an honours chemistry and mathematics student who will begin her studies at Oxford University this Fall. “I’m immensely proud of all the work Rotaract Mount Allison has accomplished in my time here and will strive to continue that work as I move on to the next chapter of my life.”

Robertson was visiting from Oxford University where he is completing his Master’s degree. He says that he was surprised to receive the honour but that the Rotary Club has been a huge part of his family tradition.

“It’s an honour to receive this award from an organization that’s been such a big part of my family,” says Robertson. “I’ve continued to be involved with Rotary Club in the UK. It was great to be back and share this honour with Elise and Katherine since we’ve all worked together on different projects in Sackville over the years.”

More information on the Sackville Rotary Club can be found at: https://www.sackvillerotary.ca/