Class of 2019 honoured at Last Lecture 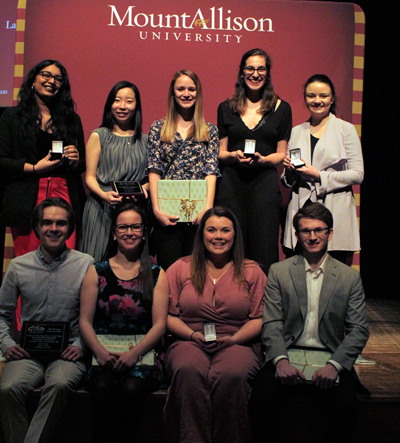 The fifth annual Last Lecture, recognizing graduates for their contributions to the Mount Allison and Sackville communities, was held on March 26, 2019.

The graduating class chose Dr. Louise Wasylkiw from the Psychology Department to present at the celebration. She addressed the Class of 2019 and encouraged them to find meaning in whatever they do.

The 2019 Grad Class Executive also announced their class gift to the University — an expendable bursary handed out over the next three years valued at $1,500, with preference given to a first-generation student.

A number of major graduating awards were handed out during the evening.

The Don Norton Memorial Award went to Andrew Moreira. The award honours the top graduating male student who, during his final year, makes the greatest overall contribution to University life.

Moreira was an academic mentor in Campbell Hall and a TA in math and physics and The Meighen Centre. With the MASU he served as a first-year councillor before going on to sit as a science senator and Board of Regents rep. He was also involved with the Model UN club as an executive member and serves as President of the WUSC Student Refugee Program.

The Frances S. Allison Award, the highest honour for a graduating female student, was awarded to Jenna MacLellan. The award recognizes outstanding academic achievement, as well as achievement in areas such as sports, class projects, service to the University, development of character, and leadership. A Commerce student, MacLellan has been active in the Commerce Society since 2016, serving as the President this year, and previously as an executive member and 2nd year representative. Within her department she is a member of the Case Competition Program participating in annual competitions, she is on the department’s Leadership Council, as well as worked as a mentor in this year’s Social Sciences Peer Mentorship Program. Outside her studies, MacLellan is a varsity soccer player and a campus ambassador and in previous years has sat on the executive for Mount Allison’s Mounties in Motion club, which sees student athletes volunteering with local schools and the hospital. She also served as a resident assistant and has volunteered with Right to Play, assisting in the organization of charity events including hockey games, parties, and fundraisers. 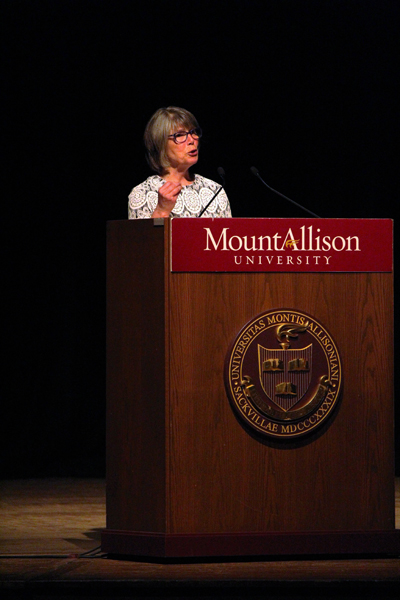 The Charlie Hunter Award is presented to a student who has shown exemplary student leadership and demonstrated commitment to student involvement and engagement during their time at Mount Allison. This year’s recipient was Anneke van der Laan.

An honours math and computer science student, van der Laan has made a strong first impression throughout her Mount Allison career, earning MASU First Year Student of the Year recognition in 2016. She followed this up by being Social Chair of Windsor in her second year and has been involved with University Orientation (Committee), the MASU (Student Life Committee, Entertainment Committee, Science Council), various University committees including Alcohol Harms Reduction, theatre, and Global Brigades. She served as co-President of the Women in Science Society and VP Events of the Math & Computer Science Society, all while being a math and physics TA and holding down Dean’s List standing.

Andrew Linton was presented with the Gil Latter Memorial Award, which honours a student who has volunteered their time and demonstrated an outstanding contribution to the Sackville community.

Over his time at Mount Allison, Linton, an environmental science and chemistry student, has engaged in conversations about local food and food waste and continued through his work in environmental activism. His involvement includes volunteering with Eco Action, the Sackville Commons, Sackville Farmers Market, and working with the MASU where he was the Sustainability Coordinator. Linton also helped co-ordinate this year’s Campus Climate Change Challenge (C3) campaign and the March 15 student climate strike in Sackville. 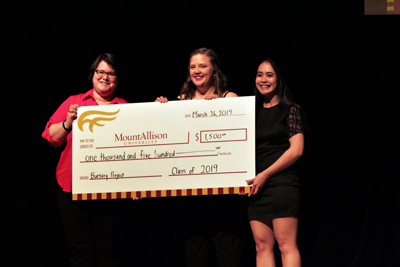 Four Gold A Awards were also presented during the Last Lecture to recognize graduating students who have made outstanding contributions to the University community. This year’s recipients were Nikky Kundliwal, Isabelle Spinney, Emma Miller, and Keely McGill.

The 2019 Barritt-Marshall Award went to Sakurako Goto from Japan. The award honours the graduating international student whose contributions to the internationalization of campus and the community have helped to promote cross-cultural understanding and co-operation.

Goto, who is studying international relations, has been passionately involved in MOSAIC and has served on the executive for two years. She is also a dedicated member of the International Mentorship Program — a program which matches first-year international students with upper-year students to both provide support for new international students and fosters community and cross-cultural awareness on campus. She took on the leadership role as head mentor this past year. Goto has also volunteered as a MASSIE conversation partner and as an International Orientation facilitator and worked as a Meighen Centre tutor and a Spanish lab assistant.

The Chris Metallic Prize in Indigenous Leadership was awarded to second-year student Kiara Bubar. The award was established by the Class of 2016 and recognizes a student who makes the greatest contribution to the indigenization of campus. A psychology student, Bubar is part of the Women in Science group and a passionate advocate for LBGTQ2Spirit awareness.

Photo captions: 2019 Grad Award recipients, guest speaker Dr. Louise Wasylkiw, and the 2019 Class gift presentation of an expendable bursary handed out over the next three years valued at $1,500, with preference given to a first-generation student.