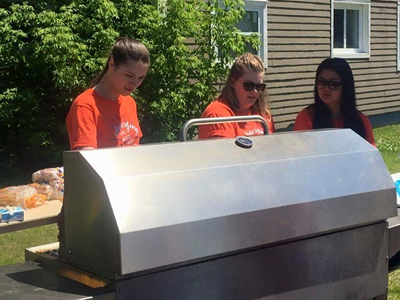 Fourth-year biology student and this year’s Shinerama chair Megan Woodman says there are many reasons why she wanted to become more involved in this year’s Shinerama Mount Allison campaign. A participant for the past three years, Woodman took on the lead role for a worthy cause, Cystic Fibrosis Canada.

“This organization is really cool because the campaigns are student-led and they really empower students to get involved, make a difference, and work to be a part of something bigger than themselves,” says Woodman.

The campaign goal this year was an ambitious $35,000. With fund raising efforts still happening, the current total is approximately $28,000.

Shine Day, the group’s largest fund raising effort, took place at the end of Orientation Week and raised an impressive one-day total of $15,000. The summer squad also held a variety of other events, including grocery bagging, bottle drives, Canada Day and New Brunswick Day BBQs, Bar Blitzs, a pub crawl, Concert in the Park BBQs, bake sales at the Saturday Farmer’s Market, a raffle basket, and the 65 Roses Gala at Hammond House.

“I really made an effort this year to get the entire Sackville community involved,” says Woodman. “I am really proud of all the initiatives that involved community events and gave us the chance to educate more people on cystic fibrosis research and our campaign.” 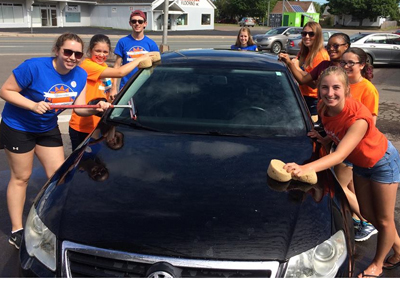 Woodman says she gained a lot from this experience.

“On a professional level I gained a lot of great leadership skills and learned how to run meetings and manage a volunteer team,” she says. “On a personal level, I really enjoyed going to the conference and meeting people that have had difference experiences. I know so much more about the disease now, how it affects people, and how the research to try to find a cure happens.”

Woodman plans to pursue a career in the healthcare field after graduating from Mount Allison next year.

To donate to the campaign, visit Shinerama Mount Allison.