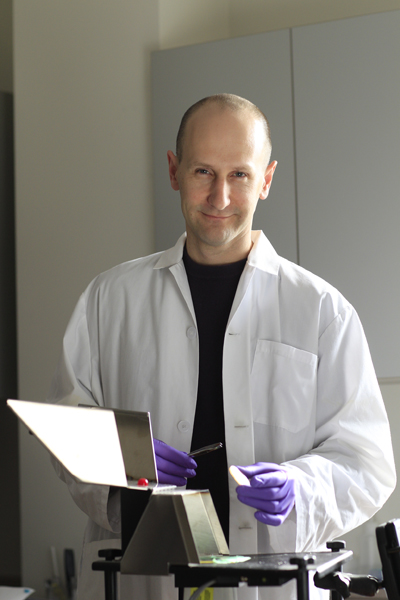 The Paul Paré Medal recognizes outstanding teaching, research, scholarship and/or creative activities. Established at Mount Allison in 1994, it is funded by the Paul Paré Endowment Fund.Fleming, an award-winning researcher and former Canada Research Chair in medical physics, says it’s an honour to receive the award at this time in his career.

“It feels really great to be recognized with the Paul Paré Medal,” says Fleming. “Our research is now at a stage where it has started to be directly applied in areas of medical physics. It’s exciting to be at a point where our work is being used to help with important advancements in the medical field.”

“David’s research program has made important, international contributions in the area of medical physics,” says Ollerhead. “His work with collaborators on and off campus, including many undergraduate students, is commendable. I wish to congratulate him on this latest honour.”

Fleming, a Mount Allison alumnus, has been a physics professor for nearly 20 years. He runs an active research program which includes using X-ray technology for trace element detection in tissue samples and people.

Focusing on lead, arsenic, and zinc, Fleming and his research team, made up of Canadian and international collaborators and Mount Allison students, can measure trace elements in nail samples using X-rays. This provides an accurate, non-invasive, and economical measurement.

The lab has collaborated with a number of organizations including the Atlantic PATH Medical Study, part of the largest chronic disease study in Canada and has received a significant amount of external funding including a current five-year Discovery Grant from the Natural Sciences and Engineering Research Council of Canada (NSERC).