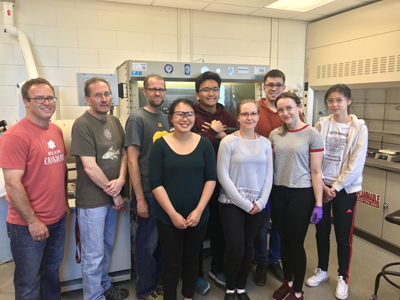 SACKVILLE, NB — Mount Allison University chemistry professor Dr. Stephen Westcott has been renewed as the Canada Research Chair (CRC) in Green Boron Chemistry. Westcott’s renewal as the CRC was announced as part of a national event with Hon. Kirsty Duncan, Minister of Science and Sport held earlier this month.

Westcott’s latest appointment is for a Tier 1 Chair, which is for seven years and comes with over $1.4-million in research funding over that time period.

“This funding helps support our lab in a number of ways, including researchers and student positions, equipment, and international collaborations. It allows us to focus on long-term projects,” says Westcott. “I would like to congratulate the entire team on this accomplishment, especially Chris Vogels, who has been a dedicated and loyal research member and teammate for over 20 years and made this all possible. This is all about many fantastic people, it is not about me.”

Westcott’s current lab team includes three research associates and eight student summer researchers. They are working with researchers across Canada and around the world with current collaborations in Japan, Spain, the U.K., the U.S., and Australia.

“Steve Westcott is known internationally for his research in the areas of boron chemistry and organometallics,” says Jeff Ollerhead, Mount Allison University provost and vice-president, academic and research. “He has also worked with and mentored hundreds of students and researchers at Mount Allison, helping to launch many careers in the field of chemistry and biochemistry through his Wild Toads research group. I would like to congratulate him on behalf of the University community on being renewed as a Canada Research Chair.”

A CRC since 2000 and Mount Allison professor since 1995, Westcott’s research focuses on chemicals containing the element boron, a naturally-occurring substance. Westcott and his team are working to learn more about boron and its potential use in the fields of medicine and agriculture.

“Boron has so many beneficial properties, it’s anti-fungal, anti-bacterial, anti-cancer, and non-toxic,” says Westcott. “Our lab, along with international partners, are looking at ways this element could be used in a number of areas including antibiotic resistance and green pesticides. The CRC is critically important in helping these kinds of collaborations and we are excited about the potential applications of this research.”

Westcott’s lab is currently looking at capsaicin, the active ingredient in hot peppers. It has been found to have many medicinal properties, most notably as a potential anti-cancer agent. The lab makes derivatives of this natural chemical to help test these theories and potential applications in the medical and pharmaceutical fields. Initial results have shown great promise.

Westcott was recently named a Fellow of the Chemical Institute of Canada and a Fellow with the Royal Society of Chemistry, based in the United Kingdom.