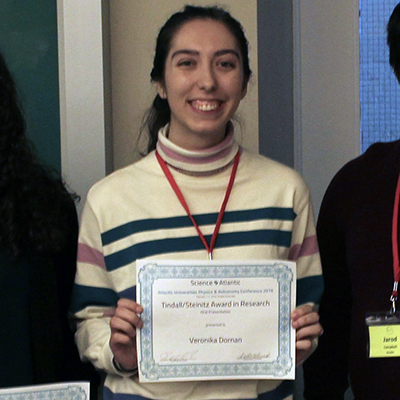 Named after two of the region’s top physicists, the Tindall-Steinitz Award is the top student prize given at the annual undergraduate conference. Dornan attended the regional conference with 10 students and faculty members from Mount Allison.

“I was surprised and humbled to receive the award,” says Dornan, who is minoring in math and astronomy. “There are students from across the Maritimes presenting and there were a lot of great presentations. It’s a really exciting field to be part of.”

Dornan’s research looks at Delta Scuti Stars — a class of variable stars about twice the mass of our Sun. She uses changes in the amount of light produced by the stars and computer models to study the stars' interior structures. Previous work had found a relationship between convective overshoot and pulsation frequency, but only at stars of the same composition as the Sun. Working with Mount Allison physics professor and astronomer, Dr. Catherine Lovekin, Dornan is extending this work to look at a range of compositions.

“I’m really thrilled for Veronika. It’s great for her to get some external recognition for both her research and her presentations skills,” says Lovekin. “She’s producing some excellent results as part of her thesis.”

Dornan attended the AUPAC conference last year, but this was her first year presenting research at the regional gathering. As she has continued working on her thesis this past summer and over the academic year, Dornan has now presented her work on several occasions including at the Canadian Undergraduate Physics Conference held in Alberta last year and at the Canadian Conference for Undergraduate Women in Physics held in Ottawa in January. She says these experiences have been invaluable in her studies.

“With each opportunity to present, I’m able to incorporate the feedback I receive and see my research presentation evolving,” says Dornan. “I felt like the AUPAC Award in particular really showed my progress from these experiences.”

Originally from Ottawa, Dornan says she was always interested in astronomy and is excited to be working with Lovekin, the first tenured female professor in the University’s physics department.

“Last summer was the first time I did research, it’s really exciting. I’m now working on my honours and am in the process of applying to grad school,” says Dornan. “I hope to continue a career in research in this field.”

Dornan is also President of the Mount Allison Students’ Physics Society and is this year’s recipient of the Pravin K. Varma Teaching Internship Award. She is committed to physics outreach in the community, co-leading an astronomy program at the local elementary school, volunteering with the Kids in Action mentorship program, and as a Brownie leader with Girl Guides of Canada.