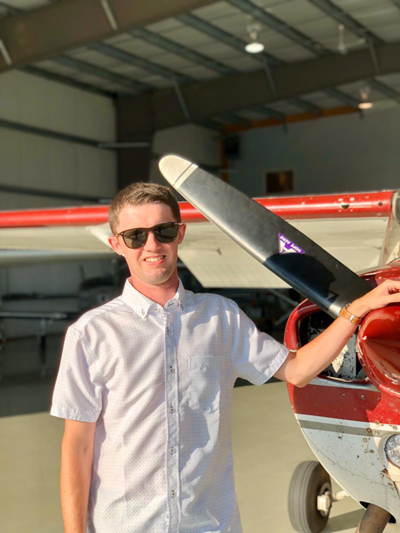 Mount Allison University Aviation student Brady Parcels will join aspiring pilots from across the country this summer as part of the Webster Memorial Trophy Competition. The annual competition seeks to name “Canada’s Top Amateur Pilot” and is being held at the Moncton Flight College (MFC) from August 19-23.

The annual Webster Memorial Trophy Competition began in 1932. It is named after John Webster Jr., a civilian pilot who participated in the 1931 Trans-Canada Air Pageant and welcomes pilots from across the country. Held in a different part of Canada each year, students from Mount Allison and the Moncton Flight College’s (MFC) BSc Aviation program have been well-represented in the competition over the past decade.

From Belleville, ON, Parcels is going into his fourth-year of his Bachelor of Science in Aviation degree, where students earn an undergraduate degree at Mount Allison along with their commercial pilot licence through a partnership with MFC.

“Growing up near CFB Trenton, I was exposed to aviation at an early age, lots of my friends’ parents work in this field,” says Parcels. “I wanted to go into aviation but also get my university degree, which is how I came to Mount Allison.”

Parcels is also studying economics and geography, topics he says he finds applicable to many areas.

“I use skills and theories I learn in these subjects every day. They pair quite nicely with aviation,” he says.

Starting in Air Cadets at 12, Parcels completed flight training as a cadet, earning his glider licence as a teenager. He says he would like to work as flight crew in the airline industry one day.

“Part of the week-long competition is an opportunity to meet with people who are working in the aviation industry. I’m looking forward to being part of the competition and meeting with and learning from professionals in the field,” he says.

Outside of classes, flying, and ground school, Parcels enjoys biking, skiing, and other outdoor activities whenever possible.