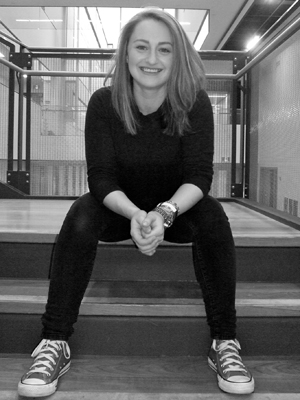 Psychology graduate Brittnay Sutherland has been freestyle dancing since she could walk. At the age of 12, she tragically lost her mom and moved across the country to live with her aunt and uncle in Miramichi, NB. She was soon enrolled in her first dance class.

“They wanted to put me in something productive and figured this was a great outlet for me,” she says. “Dance has truly saved my life.”

Sutherland chose Mount Allison University for its beauty and great reputation, but being able to continue dancing at the University sealed the deal. In her first year she talked herself out of getting involved in dance, fearing she wasn’t good enough.

"I loved Mount A and my roommate and I made amazing connections, but without dance in my first year it was hard. I don’t know who I am without dance, so without it I was a little lost.”

In her second year, she joined the University’s dance society and quickly moved on to the competitive varsity dance program, dancing and choreographing in her remaining years. In her third and fourth years, the squad attended world championships in Orlando, FL, and in their first world championship placed 7th for their hip hop routine choreographed by Jacquelyn LeDrew (‘11).

Sutherland recently received the best news in her dance career to date. She was one of few Canadians (and the only Atlantic Canadian) to win a scholarship to the dance convention, BuildaBEAST 2016, being held in Los Angeles, July 18-22. BuildaBEAST 2016 is hosted by LA choreographer, producer, and director, WilldaBeast Adams.

Sutherland submitted a video on Twitter that showcased her dancing to Beyonce’s Formation and telling her dance story. She was chosen in the top ten of the social media contest, earning her a spot at the convention.

“The prize is a $500 scholarship to the convention, but the opportunity to work with these choreographers and the chance to audition for the dance company afterwards is priceless,” she says.

Sutherland would like to make dancing her career and she credits choreographer/producer WilldaBeast with making these kinds of opportunities available to dancers around the world.

“If you are a dancer, you get to do what you love, but you don’t get to make a whole lot of money. He’s looking to change that,” she says.

At 24, Sutherland admits she is getting older in the dance world, but is seizing this once-in-a-lifetime opportunity. She would some day like to further her career in psychology and go to graduate school to become a counsellor. But, for now, she says “it is never too late to become a beast.”