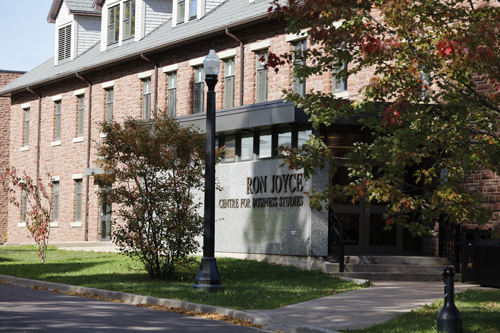 The symposium, which takes place in Tweedie Hall in the Wallace McCain Student Centre, will explore the often misunderstood meaning of public accountability.

Dr. Chris MacDonald opens the event at 11 a.m. with a talk titled “Trust in the Private and Public Sectors: Meaning and Mechanisms.” MacDonald is the author of the highly respected Business Ethics Blog and director of the Ted Rogers Leadership Centre at Ryerson University’s Ted Rogers School of Management, where he teaches ethics and critical thinking.

“We are delighted to have such high-calibre speakers share their knowledge and insights with us,” says Dr. Sandy MacIver, director of the Ron Joyce Centre for Business Studies at Mount Allison University. “We live in a time when citizens seem to have less and less trust in their elected officials and are disillusioned with the idea of public accountability. Our extraordinary speakers can also help us extend our thought process to trust issues in society at large and in the corporate sector.”

The event will continue in the afternoon with an interactive panel discussion focused on what accountability means. Panellists include Don Bowser, who is originally from New Brunswick and works to build capacity and enforce public accountability around the globe; Olivier Mesley of Mount Allison’s Department of Commerce, who has expertise in project management, marketing, trust, and people in organizations; Barb Clayton of the Department of Religious Studies, who researches ethics and the happiness phenomenon in Bhutan; and Erin Steuter of the Department of Sociology, who has conducted research on biases and messaging in editorial and other cartoons.

All participants will also have a chance to take part in small group discussions to wrap up the event.

The symposium is open to all. Registration is free for students and $20 for the general public. Find out more about the event or register online at: http://www.mta.ca/commerce/pas/