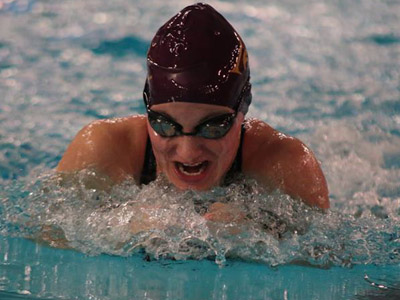 In her graduating year at Mount Allison, Commerce student and Swimming Mountie Zoee Leblanc is having her best season yet in the garnet and gold. Traditionally a long-distance swimmer, this season she switched to sprinting distances and credits her success to a change in mindset.

“I have gone up and down with swimming,” she says. “Last year I would train three times a day in the gym and the pool and I overdid it. I learned, with a lot of support from my family, to remember why I started swimming. I have become more passionate about each and every race, not taking it for granted, not looking at the time, but just enjoying every second of It. Even getting up in the morning. I used to do it because I felt obligated to and now I do it because I love it."

She trains 20 hours per week with five mornings and five evening practices, plus weekend meets, for the six-month season. Ninety per cent of her races this season have been personal best times.

“It is a huge time commitment,” she says. “I don’t think most people realize how much time we put into it. And when you’re serious about swimming, you train all year round."

Originally from Yarmouth, NS, Leblanc began swimming competitively at the age of seven with the summer swim team, but she has been in the water since she could walk. 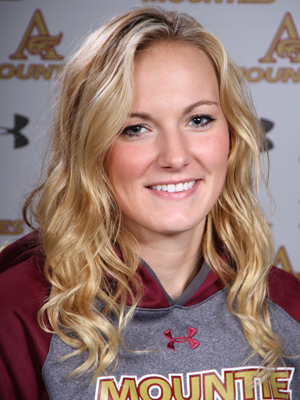 “My dad would take me and my sisters down to the lake,” she says. "All three of us are competitive swimmers."

Leblanc says that being a student-athlete has made her experience at Mount Allison.

“It has been everything for me, definitely,” she says. “My friends, roommates, and big social groups are all swimmers.”

This year’s team captain says her most memorable swimming moments at Mount Allison are not races.

“I am passionate about the training, being fit, and being in the pool with all of my friends,” she says. "Last year we needed some motivation, so our team captains and I spoke with the whole team, and the atmosphere changed completely. We brought it all together in the last two weeks. That was one of my greatest moments."

Leblanc admits it will be sad to see her final competitive season end in a few weeks, but swimming will always be a part of her life. In October she will start working toward her CPA with Ernst & Young in Newfoundland and plans to join a masters swim club.