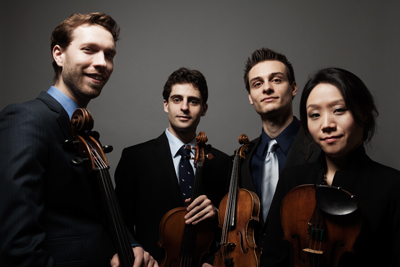 “The Music Department of Mount Allison University is thrilled to welcome the Tesla Quartet in celebration of our dual anniversaries in 2016-17,” says Stephen Runge, head of Mount Allison’s Music department. “We know their presence on campus will enrich the musical education experience for our students, faculty, staff, as well as surrounding community members.”

As the Bell Quartet-in-Residence at Mount Allison, the Tesla Quartet will be featured in several on-campus performances, including quartet recitals and collaborations with faculty and guest artists. As active members of the Department of Music, the quartet will contribute to and enrich the Music program by presenting master classes, coaching student chamber music ensembles, working with the Mount Allison Chamber Orchestra, collaborating with composition students, appearing as guests in various courses, and engaging with the larger University and Sackville communities. 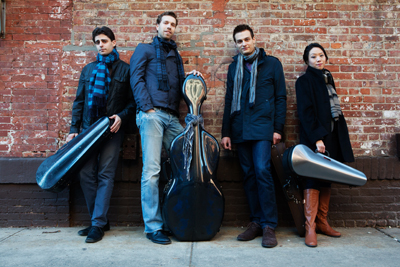 Dubbed “technically superb” by The Strad magazine, the Tesla Quartet has garnered top prizes at numerous international competitions, including the Gold Medal at the 2012 Fischoff National Chamber Music Competition, Third Prize and the Best Interpretation of the Commissioned Work at the sixth International Joseph Haydn Chamber Music Competition in Vienna, and third prize at the 2012 London International String Quartet Competition. The Tesla Quartet was formed at The Juilliard School in 2008 and quickly established itself as one of the most promising young ensembles in New York, winning Second Prize at the J.C. Arriaga Chamber Music Competition only a few months after its inception. The London Evening Standard called their rendition of the Debussy Quartet “a subtly coloured performance that balanced confidently between intimacy and extraversion.” The quartet has enjoyed a busy performing schedule, both in the United States and abroad, with recent international appearances in Austria, France, their London debut at Wigmore Hall, and an upcoming tour of China and South Korea.

Community involvement and outreach are integral parts of the Tesla Quartet’s mission, and the group has brought inspiring music to children’s hospitals, soup kitchens, libraries, retirement communities, and schools. In addition to their current community enrichment residency with the Western Piedmont Symphony in Hickory, North Carolina, the ensemble formerly spent three years in partnership with the Aspen Music Festival’s Musical Odysseys Reaching Everyone program (M.O.R.E), providing lessons, master classes, workshops, and performances for young string players in the Roaring Fork Valley, Colorado. As Quartet-in-Residence at the Strings Music Festival from 2012-13, the quartet provided community enrichment programs to the Steamboat Springs and Craig, Colorado, communities.

From 2009 to 2012 the quartet held a fellowship as the Graduate String Quartet-in-Residence at the University of Colorado-Boulder, where they studied with the world-renowned Takács Quartet. Additional coaches include the Tokyo String Quartet, the Artis Quartet, Mark Steinberg, James Dunham, Robert Mann, Sylvia Rosenberg, and members of the Alban Berg, Emerson, Endellion, and Kronos Quartets.