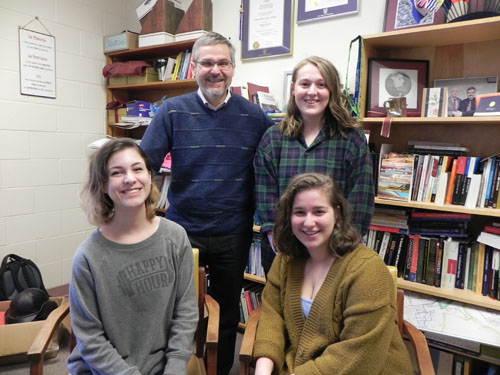 Three Mount Allison University students recently took part in a national conversation about language in Canada at The Future of Linguistic Duality: Our Official Languages, Our Identity conference hosted by the Commissioner of Official Languages.

Madeleine Léger, Rebecca Richard, and Caitlin Gallant are all studying political science but each is also pursuing a second major in another area; Léger’s second major is philosophy, Richard's is religious studies, and Gallant's is environmental studies.

The students heard about the conference from Political Science Professor Dr. Mario Levesque.

“I taught Madeleine, Rebecca, and Caitlin in a number of classes, and they worked for me as research assistants over the summer,” says Levesque. “I was aware of their interest in linguistic issues.”

All three are bilingual, Richard and Léger are Francophone students from New Brunswick and Gallant went through an immersion program on PEI.

“I thought this was something they could use to enrich their studies. As well it was an opportunity to meet and network with people in government,” says Levesque.

Although the students attended the conference in Moncton, NB, they were linked to participants in five other cities across Canada. They had roundtable discussions and shared their insights on various language issues.

“We were pretty much the only students there. It really interesting. We were able to give our own student perspective to this issue, which they loved,” says Richard. Both Richard and Léger are from Fredericton and attended École Sainte-Anne.

For Léger the conference was an important piece in her study of bilingualism.

“It is something I hold dear. I have a radio show on campus where I talk about bilingualism,” she says. “I also testified in the Senate consultations that happened recently. So, this was another piece of the puzzle and it is something I hope to work on some more.”

The complexity of the conversations was reflected in what the students say they took away from the experience. For example, the trio said they were also able to learn about preserving and protecting Indigenous languages and, with increasing numbers of newcomers to Canada, the idea of multilingualism.

“Bilingualism and duality are very important but we need to find a way to celebrate and preserve other languages that are spoken here. They are all incredibly important and part of our fabric,” says Léger.

Richard says she learned a lot about how different regions in Canada view languages.

“The pinnacle of the day happened when the groups from each city reported their ideas back to Ottawa. Much of what I learned came from the regional differences in the answers,” she says. “People from Manitoba had a different prospective from those in Quebec and we in the Maritimes.”

Gallant says the experience made her reflect on the issue of cultural gaps and languages in the country.

“A lot of our discussion was about bridging cultural gaps because there are many people who speak both English and French but don’t necessarily feel comfortable and confident speaking their second language to a native speaker,” says Gallant.

Building on this cultural aspect, Léger says, “We need to create accessible spaces and opportunities for preserving culture, in terms of both our official and unofficial languages. We must also take advantage of services that are already in place, like Radio-Canada and CBC.”