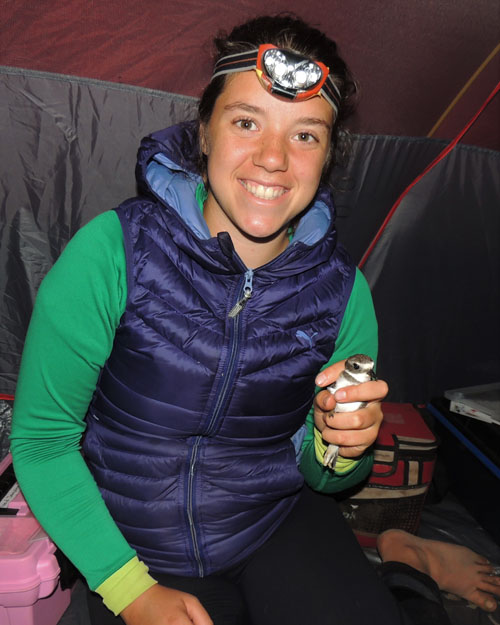 Biology professor Dr. Diana Hamilton has received a $140,000 grant over five years for her work on migratory birds in the Atlantic region, while Dr. Mohammad Ahmady and Dr. Ruben Sandapen received funding for their research projects in physics. Ahmady’s project, titled: “AdS/QCD holograph light-front wavefunction, diffractive vector meson production and B physics” received $60,000 in funding over three years, while Sandapen’s work, “Light-front holographic QCD and exclusive B decays” was awarded $45,000 (over three years).

“Mount Allison researchers are continuously reporting on important findings and making significant contributions to their disciplines, both in the field and in the lab,” says Dr. Jeff Ollerhead, University Provost and Vice-President, Academic and Research. “I wish to congratulate Diana, Mohammad and Ruben on this latest NSERC funding.”

Working with a team of Mount Allison research students and researchers from the Canadian Wildlife Service, Hamilton is studying migratory shorebirds and intertidal systems in the Maritime region. Hamilton and her team have in the past focused on the Bay of Fundy, but are now looking at shorelines outside the Bay. She and her students spent the past two summers at research sites along the Acadian Peninsula, radio-tracking shorebirds and assessing their habitat, diet, and behaviours.

“Having data from locations across the region helps give us a better idea of the birds’ activities in the area; where they are stopping, what they are eating, and different patterns in their migration routes,” says Hamilton.

Along with tracking migration routes, Hamilton is also looking at intertidal community structure in areas where birds feed to get a better idea of the relationship between shorebirds and the ecological communities on which they rely.

“Our shorelines are changing, sea level is predicted to rise as a result of climate change,” says Hamilton. “We’re seeking to understand shorebird movements and habitat use now so that we can identify critical stopover areas within the region and better predict how birds may respond to these changes.”