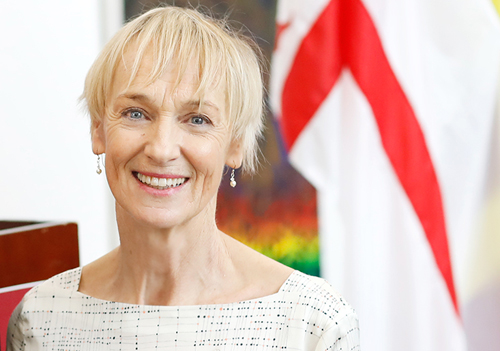 SACKVILLE, NB — Mount Allison University English and Canadian Studies Professor Dr. Christl Verduyn has been named a 2018 3M National Teaching Fellow. The award, created by the Society for Teaching and Learning in Higher Education (STHLE) in 1986, recognizes exceptional teachers in higher education across the country. Ten recipients are named each year.

“I am thrilled and honoured to become part of the community of 3M educators and to do so as a member of the Mount Allison community,” says Verduyn. “I am really excited about the possibilities, opportunities, and projects in teaching and learning that lie ahead in both of these communities, and beyond. I thank my many students and colleagues, present and past, for their support and interest.”

Verduyn has taught at Mount Allison since 2006 and is also director of the University’s Centre for Canadian Studies. She has received both of the University’s highest faculty honours — the Paul Paré Medal, recognizing research and scholarship, and the Tucker Teaching Award. Verduyn has enriched the educational experience for Mount Allison students and the public through her own teaching and by bringing an array of authors, writers, and scholars into her classes and the wider community such as Thomas King, Lawrence Hill, Sheila Watt-Cloutier, and George Elliott Clarke.

“Christl Verduyn is one of Mount Allison’s most accomplished faculty members, both in her teaching and in her research,” says Dr. Jeff Ollerhead, Mount Allison University provost and vice-president, academic and research. “We wish to congratulate her on receiving a 3M Fellowship and thank her on behalf of the entire community for her tireless commitment to guiding our students to make important connections between Canadian authors and their literature, and the wider cultural context within which we live.”

Verduyn has worked diligently to introduce her students to different aspects of Canada. She has brought authors from various backgrounds and communities to campus. She has also developed and taught a myriad of courses in Canadian and Québécois literatures, Canadian studies and multiculturalism, and women’s studies, as well as special topics courses on select authors and issues. Her philosophy of teaching centres on respect for and inclusion of difference in all its dimensions — from gender, language, culture, and class to ability and opportunity.

A Fellow of the Royal Society of Canada and President of Academy I from 2007-2009, Verduyn was also recently named to the Order of Canada for her contributions to Canadian studies, notably as a professor and author, and for her commitment to making Canadian literature accessible to a broader audience.

The 3M National Teaching Fellowship is the only pan-Canadian, cross-disciplinary recognition of educational leadership and excellence in post-secondary teaching. Fellows receive a lifetime membership in STHLE and participate in a four-day study retreat held each year.

Eight Mount Allison professors have been named 3M Teaching Fellows during their time at the University, giving Mount Allison one of the best records in the Maritimes for the award.