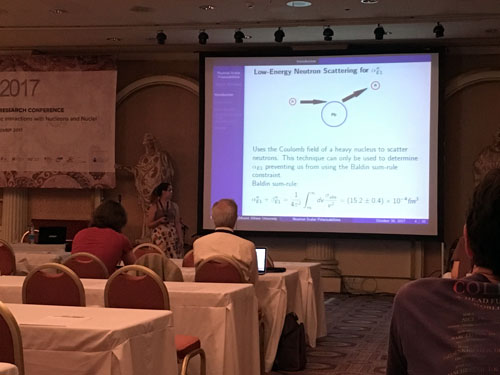 Working with Mount Allison Physics Professor Dr. Dave Hornidge, Ripley and Wentland have been conducting research both at Mount Allison and in at the Maniz Microtron at Johannes Gutenberg University in Mainz, Germany as part of their undergraduate degrees.

“My research is doing background simulations on an upcoming experiment aiming to more accurately determine neutron scalar polarizabilities,” explains Wentland who is majoring in physics with a double minor in computer science and drama. “I write code that takes simulated data, generated from educated guesses and what we learned from past experiments. I then analyze the results for change or errors. My research is the same in Germany and in Canada as it’s mostly computer based but I get to assist in the experiments that are currently running at the Mainz accelerator.”

Wentland, who is originally from Camrose, AB presented on this work at the Cyprus conference. 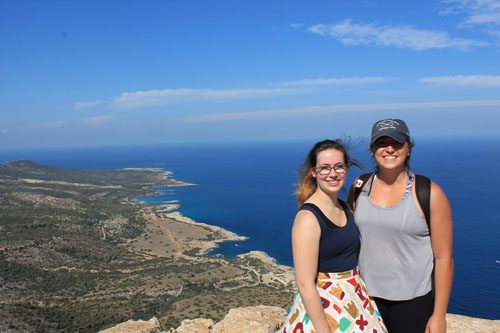 Ripley has also been conducting research on campus and in Mainz for the past two summers. Her work looks at the Proton Radius Puzzle (PRP), one of today’s most known unresolved problems in physics. Her thesis and EINN conference presentation both focus on this topic.

“I was incredibly excited to participate in an experiment, and an international conference, like this, seeing as the PRP is one of today’s most recognized unresolved problems in physics,” says Ripley, who is from Fredericton, NB. “The best part of my conference experience was meeting such a diverse group of individuals in the same research field as myself. Since the conference content was so specific and it was also an international conference, I was very fortunate to have had the opportunity to discuss my research in depth with physicists from all over the world.”

“The best part of the conference for me was meeting with a large group of successful physicists who were eager to tell me about their experiences and were impressed with the research that I’ve done,” she says. “It was encouraging to hear from people who really know what they are talking about that I am doing a cool thing and I can talk about it in an intelligent manner.”

Hornidge says this kind of experience is an important one for beginning researchers.

“Both Sara and Maeve have been working on high-level, international research projects over the past two years as part of their Mount Allison degrees,” he says. “The EINN conference allowed them to present their findings thus far to physicists from around the world and gain valuable skills and contacts. They represented Mount Allison well.”