Mount Allison partnering with US, German universities on Open Greek and Latin Project 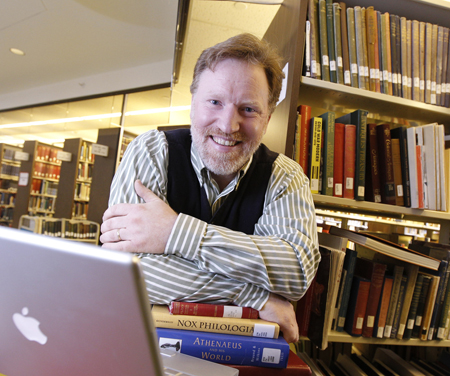 The Mount Allison University Classics department has joined forces with Harvard University, Tufts University, the University of Virginia, and Germany’s Leipzig University to bring a new resource in classics online — the Open Greek and Latin Project (OGL). The international collaboration brings free access to all source texts written in Classical Greek or Latin from antiquity to c. 600 CE.

“I got involved with the project while on sabbatical a number of years ago,” says Dr. Bruce Robertson, Mount Allison classics professor and department head. “Through a number of grant opportunities, including the Digging into Data Challenge, we’ve been able to partner with the Harvard Library, Tufts University, and the University of Virginia to bring over four-million works of Greek text online, completely accessible to all researchers.”

The collaboration is truly international with teams working on submissions in Canada, the US, and the UK. The OGL employs an editing team in Cambodia, which has moved the resources to a 99.9% accuracy level, key for ongoing research initiatives.

Robertson has continued his involvement in the project and, with funding from the New Brunswick Foundation for Innovation, employed two summer students who assisted directly with materials for the OGL.

“Digitizing resources like this is very important for many fields in the humanities — classics, but also religious studies, history, philosophy, and others,” says Robertson. “Our next phase will move into early Christian writing, giving many students and researchers access to valuable texts. There’s a lot of potential for additional research with a large digital collection like the OGL.”

Robertson says his department is hoping to take advantage of this new resource, offering a course with a digital humanities component next term, taught by assistant professor Dr. Chris Forstall.

View the Open Greek and Latin Project at: http://www.dh.uni-leipzig.de/wo/projects/open-greek-and-latin-project/