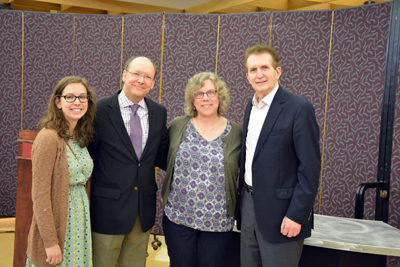 SACKVILLE, NB — Mount Allison Chaplain Rev. John C. Perkin was recognized for his exceptional contributions and commitment to the University as the 2016 recipient of the Purdy Crawford Staff Award of Excellence. The annual award recognizes a staff member who has gone beyond the call of duty and displayed exceptional service to their department and the University.

Perkin has worked as Mount Allison’s University Chaplain, and also as an adjunct professor in religious studies since 1993.

“It’s an nice affirmation of what I do here at Mount Allison,” says Perkin. “My job is to nurture the spiritual life on campus, which involves a very public role but also a lot of private work in terms of counseling, assistance in crisis management, etc. I’m honoured to receive this award.”

Along with his work in the Chaplain’s office, Perkin also plays a key role in the University’s Commencement and Convocation ceremonies, welcoming students to campus as they begin their academic careers and congratulating them as they leave Mount Allison. He has served as Dean of Students, head of Leadership Mount Allison, coordinator of the Mansbridge Internship, chair of the Bombardier International Travel Grant, and the faculty advisor for the Summer Studies in India Program. He is also a regular contributor to the Argosy, Mount Allison’s independent student newspaper.

In concert with others, he helped introduce the academic mentors in residence program and the inclusion of a dedicated multi-faith prayer space in the Student Centre. He continues to offer “Tea on Tuesdays” in the basement of the chapel for students who are looking for a break from their studies and an opportunity for informal conversation.

Over the past year, Perkin has taken on a new, very successful community project, as Chair of the Sackville Refugee Response Coalition (SRRC). The SRRC is a community-wide initiative that is working in support of bringing as many as three refugee families to Sackville. It formed last fall when a group of concerned citizens came together to discuss the humanitarian crisis brought on by the Syrian civil war and how Sackville might respond.

Under his leadership, the group has raised over $120,000 for refugee efforts in a very short time and received local and national media attention. They are preparing to welcome two families to Sackville later this spring.

A true Mount Allison family, both Perkin’s children attended Mount A (Wray, Class of 2013, and Joanna, Class of 2017) and his wife Dodie works in the University’s bookstore.

Perkin will be travelling to India this summer to facilitate the University’s Summer Studies in India program with 10 Mount Allison students participating.