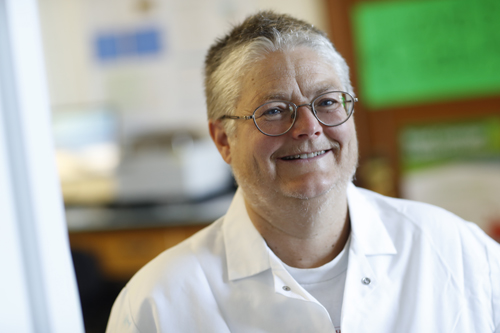 Biology Professor Dr. Vett Lloyd has been honoured with Mount Allison University’s top faculty award. The Paul Paré Medal of Excellence is presented annually to a faculty member who has exemplified outstanding teaching, outstanding research, scholarship, and/or creative activities, and who has an exemplary record of service.

“This is endorsement of the work I’ve been doing for the past few years,” Lloyd says. “I’ve converted my lab from doing cancer genetics to a community effort where we test ticks from New Brunswick and monitor the risk of Lyme disease. The University has been tremendously supportive throughout this transition, but this shows my work is being recognized by my peers.”

Lloyd is known as one of Canada’s leading tick and Lyme disease researchers but her work goes far beyond what takes place in her lab. She has given countless public talks and media interviews on the risks of Lyme and has been involved as the federal government develops a federal framework on Lyme disease.

“Vett is making tremendous contributions to our knowledge and understanding of Lyme disease in Canada,” says Mount Allison President and Vice-Chancellor Dr. Robert Campbell. “Her work is having a direct impact on Lyme disease patients and their families, as well as making a difference in the wider community. I congratulate her on this well-deserved honour.”

One of Lloyd’s studies was able to show that dogs can acquire Lyme disease anywhere in New Brunswick, not just in endemic areas, and that the incidence of canine Lyme disease is surprisingly high.

“That’s important because the Centers for Disease Control and Prevention use dogs as a sentinel for humans,” she says. “We’re also looking at wildlife species to see which are affected by Lyme disease and I’m collaborating with physicians across Canada and internationally on case studies of their patients to see whether or not there are misdiagnoses occurring.”

Lloyd’s lab regularly accepts and tests ticks from community members. The submitted ticks have helped build an impressive tick bank at Mount Allison, which has become a national resource for tick researchers, while community members have been able to find out whether or not the tick they found on a pet, or themselves, was infected with the bacteria that causes Lyme disease.

“This was going to be a side project and it took over because there was a massive void of information,” Lloyd says. “The more we found out, the more I realized how much we don’t know, about the disease, about the bacteria that causes the disease. And the students really, really wanted to work on this — so many have been touched by this.”

Lloyd’s students speak highly of her teaching. She regularly involves students in her research, giving them opportunities to work alongside her in her lab, while mentoring them and encouraging independent research and learning.