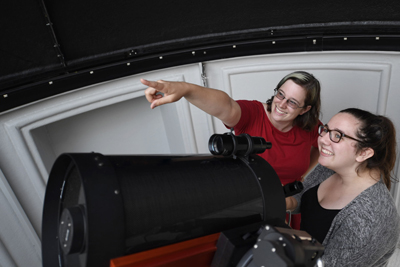 Lovekin is a member of the international science team that monitors the BRITE-Constellation satellites, five nano-satellites that capture the light of the brightest stars with high precision. Over the course of 150 days, the team captured the full rise and decline of a nova, an astronomical event that causes the sudden appearance of a bright ‘new’ star that slowly fades over time. A nova occurs when a white dwarf in a close binary star system gains enough gas from its companion to ignite hydrogen fusion at the surface. This type of event happens relatively quickly, so complete documentation is rare.

“We essentially have a full life cycle of a nova now documented, that’s really hard to come by,” explains Lovekin. “Having this record and being able to study it will help us understand what’s happening and allow us to check what we think we know about stellar evolution.”

Since its inception in 2013, the BRITE-Constellation has observed and documented more than 550 stars visible to the naked eye from the ground. The fall’s nova, originally detected by the All Sky Automated Survey for Supernovae (Nova ASASSSN-18fv) is the first time a nova’s complete development — the original outbreak, the brightness maximum, and the final phases — has been captured so clearly.

Lovekin teaches courses in astrophysics and astronomy and also oversees the Mount Allison Gemini Observatory. Although the nova observations are relatively new, she is already working to incorporate this exciting scientific discovery into her classes.

“We will be able to study and learn from this event for a long time,” she says. “Gathering this kind of data helps us understand what’s happening in the atmosphere of the white dwarf.”

See more on this discovery from the Centre for Research in Astrophysics of Quebec.