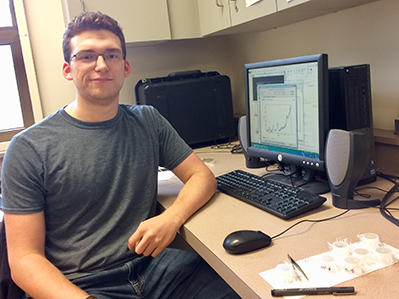 Colby Evans, a fourth-year aviation student, is working on a research project with physics professor Dr. David Fleming in the area of medical physics this summer.

“For my project this summer, I am using X-ray fluorescence to measure arsenic levels in human nail clippings collected in Nova Scotia,” explains Evans. “It’s difficult to get a meaningful measurement but, as part of the PATH study, we’re trying to organize arsenic peaks found in the samples.”

While Evans will be spending most of his research hours in the lab, he is also making time for flying this summer at the Moncton Flight College, Mount Allison’s partner in the Bachelor of Science (Aviation) program. Aviation students at Mount Allison complete 200 hours of flying as part of their degree.

“I started flying with air cadets in 2013,” says Evans, who is from Middleton, NS. “I wanted to get into aviation but wasn’t sure what career path I wanted. A friend of mine said, ‘Hey do you know about this program at Mount A?’ and that's how I learned about the program.”

Evans says the ability to combine his aviation interests with academic ones is a nice option.

“I’m really enjoying my studies in physics. It’s busy with flight training and studies but it’s given me a lot of great experience,” says Evans. “A flight outing can take up to six hours when you add in travelling to Moncton and pre and post-flight preparation.”

While Evans will graduate with his BSc and his commercial pilot licence, he says he’s still undecided about his exact career path.

“I may take some extra time and look into earning both majors, but haven’t made any firm decisions on this yet.”

When asked what advice he might share with his first-year self, Evans says, “A teacher of mine from high school used to say that 80 per cent of life is showing up. Throughout my studies, I’ve learned that’s a lot more than going to class. It’s doing your best with everything that you’re doing. This is my second summer working in the lab and it’s been a great experience.”

Evans will present part of his research project to a number of groups this summer including the Canadian Undergraduate Physics Conference in Edmonton, AB, as well as to students in the first SHAD program at Mount Allison, an award-winning enrichment program for high school students, and SURF, Mount Allison’s annual Summer Undergraduate Research Fair.