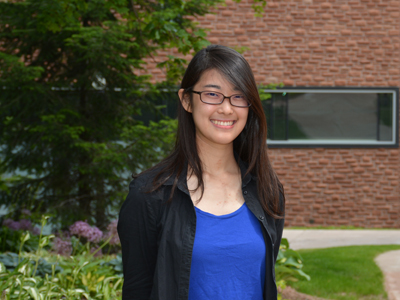 While most people will remember the Wright brothers as the first people to fly, few can reference when the first female pilot took flight in Canada (it was Alys McKey Bryant in 1913). Mount Allison University aviation student Eri Ohashi is hoping to change that.

Ohashi is spending her summer working on a research project looking at the history of women in Canada’s aviation industry. Ohashi has received an independent student research grant at Mount Allison for her study, From the Periphery to the Cockpit: A Study of Women in the Material Culture of Canadian Aviation.

“I wanted to look at women’s and gender history and material culture from an aviation perspective,” says Ohashi. “I’m looking at the time period between 1909, when many images or advertisements globally depicted women as an audience, not as pilots, after the Wright brothers’ flight, to 1973, when we saw the first female commercial pilot (Rosella Bjornson) hired.”

Ohashi travelled to Ottawa earlier this summer to visit the Canadian Aviation and Space Museum as part of her research project.

“Parts of this research are very challenging. There isn’t much documentation about female pilots, especially commercial ones since the first hires were only in the 1970s. I realize how hard the time must have been for the female pioneers in the aviation industry. They continued to work for the organizations of women in aviation even after they retired,” she says. “I saw some females wrote how fun it was to fly in the diaries and they often saw flying since they lived closed to the airdrome. This subject definitely includes a political aspect of women and gender studies.”

From Tokyo, Japan, Ohashi is minoring in religious studies as part of her aviation degree and is working with Dr. Susan Andrews in religious studies for this summer’s research. She says being able to do both aviation and liberal arts was one of the reasons she decided to come to Mount Allison.

“My high school in Japan has a connection to Mount Allison, I visited campus for a one-week program one summer and became familiar with the school,” she says. “University in Canada is a lot different from university in Japan. As an international student, I think it’s good for students to experience these differences in culture.”

Outside of the classroom and the flight deck, Ohashi also volunteers as a Chapel assistant, is a member of the Inter Varsity Christian Fellowship on campus, the University International Centre’s mentorship program, and Global Brigades MtA, travelling to Honduras in 2018.