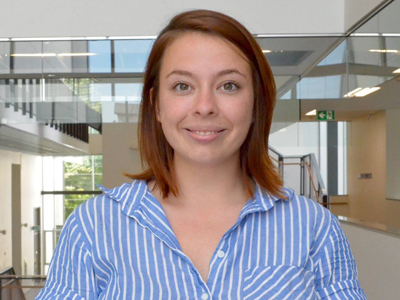 Fourth-year honours biology student Cat Bannon (’17) spent her first week of classes much differently than most. She was invited to speak at the Integrated Plant & Algal Phenomics meeting in Prague, Czech Republic. The meeting brought together leading international researchers on high-throughput, rapid analyses of plant and algal growth and performance.

Bannon was the only undergraduate in attendance at the conference and was asked to do a 30-minute presentation on her research just two weeks before the meeting.

“It was incredible to even have the opportunity to go to the meeting through my honours supervisor, Dr. Doug Campbell, but to be able to speak to this group was an opportunity I still can’t believe I had,” she says.

Bannon presented her work on developing a high throughput, low-cost approach to screen how fast algal cells sink through water.

Campbell says Bannon’s work is a highly important topic because the rate of cell sinking alters the cellular nutrient uptake, light environment, and capacity to move carbon from the atmosphere to deep ocean storage. Cell sinking rate is also critical in bio-reactor systems.

Bannon has been conducting her own research since her second year and completed two independent research studies in biochemistry before signing on to do her honours in biology.

“Being able to do this level of research has meant everything to my experience at Mount Allison,” says Bannon. “We are a small school with a big research community and therefore research falls to the undergrads. We are taught to do it well, be dependable, and think on our own very early on. It is something I don’t take for granted because I know most undergraduate students don’t have that opportunity.”

In her third year Bannon says she was told by a professor that she needed to work on her presentation and public-speaking skills, as it was a large component of science research.

“My ego was really hurt by that, but I actively started working on it and going to Toastmasters. It was incredibly rewarding and overwhelming a year later, on my first day of fourth year, to see my hard work pay off and be presenting in front of an international audience of people with PhDs,” she says.

“Attending this conference opened my eyes to career paths and allowed me to connect with influential, strong women who were extremely caring and helpful in addressing my concerns,” she says. “ We aim to do that exact same thing on campus and empower women to see themselves in science professions.”

Bannon will be completing her honours project this year in collaboration with the University of Gothenburg in Sweden. She then plans to pursue a Master’s and PhD in biology with the goal to work in industry.

“After attending the conference, I was able to see the opportunities that scientists have to create, engineer, and produce research that provides goods and services globally. I definitely see myself there,” she says.