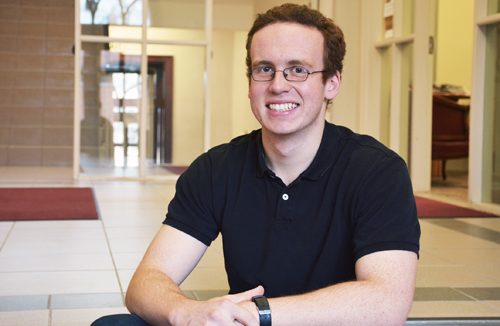 SACKVILLE, NB — Colin Robertson is Mount Allison University’s 54th Rhodes Scholar. Robertson, an honours history student with a minor in classics, is one of only 11 students selected across Canada to receive the award.

Valued at more than $100,000, the Rhodes Scholarship is one of the oldest and most prestigious in the world, covering the cost of postgraduate studies at the University of Oxford in the U.K. With 54 scholars to date, Mount Allison has one of the best records, per capita, in Canada for the esteemed award. The University has celebrated seven recipients in the last decade.

“I was in a state of shock when I got the call on Saturday. It’s been a bit of a blur ever since,” Robertson says. “When you’re waiting for your interview with the Rhodes committee, who are so accomplished, you’re in a room with all the other applicants, who are also incredible. I was thinking to myself, ‘There’s no way.’ ”

Robertson is originally from the Ottawa area but his family now lives in Sackville. He is connected to his community in many ways, including serving as president of the University’s Rotaract group for two years and currently as past president.

“The Rotaract’s focus, like the Rotary Club, is on community,” he says. “We try to help out with local schools and organizations in a number of ways, including fund raising for breakfast programs and volunteering with homework clubs.”

Robertson is vice-president of the University’s History Society and has worked as a teacher’s assistant in both history and Latin. He has also volunteered with the Tantramar Scout Troupe and the Sackville Refugee Response Coalition.

“Colin has been an outstanding and engaged member of the University and Sackville communities, as a student, a volunteer, and a teacher’s assistant,” says Dr. Robert Campbell, Mount Allison University President and Vice-Chancellor. “I wish to congratulate him on behalf of everyone at Mount Allison, on attaining this world-renowned scholarship.”

Robertson says he is humbled by the news and thankful for the support he’s received to achieve this.

“You don’t receive this kind of award on your own. I’d like to thank my parents as well as members of the History department who have been so supportive throughout my degree,” he says.

Robertson plans to continue his studies in history at Oxford at the master’s level.