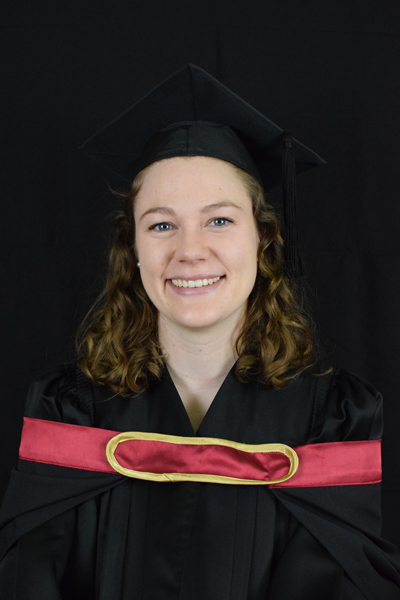 Hannah Sholtz, honours French student, with a minor in geographic information systems, has been chosen as the Class of 2019’s Valedictorian. Sholtz, who is from Hamilton ON, will complete a four-week training camp with Venture for Canada, a program which trains and connects recent graduates with startups looking for young workers on the Queen’s University campus before looking for work with a startup in Ontario.

1. What does it mean to you to be named Class Valedictorian?

It is a huge honour and privilege to be named the Class Valedictorian. I am very thankful to the Class of 2019 to have trusted me with this responsibility. I hope that I can demonstrate how much this means to me by delivering a caring, fun, and reflective address.

2. Why did you decide to study French?

When I arrived at MtA, I did not have a major chosen, so I used my first year to complete my distribution credits. During that year, my French classes captured my attention because they were both challenging and rewarding. I saw that studying French as a major would allow me to do lots of reading, writing, and speaking, things I really enjoyed. Studying French also presented me with the opportunity to study abroad in Strasbourg, France, an incredible experience. All in all, French allowed me to reach out to more people and more places and it can be put into practice in many aspects of my life.

3. What have you been involved with outside of academics during your time at MtA?

Outside academics, ultimate frisbee has been a huge part of my time at MtA. I joined the team in my first year, played all four years and was one of the captains of the team in my third and fourth year. Ultimate allowed me to stay active, travel around the Maritimes for tournaments, and to make lifelong friends. It is something I will continue to play after graduating and four years ago when I joined the team I would have never guessed the impact it would have on my life. I have also been involved with SMILE, an incredibly fun and joyous club, and have held two MASU jobs. This past year I was the MASU Chairperson, which is a very cool opportunity to become involved with the Student's Administrative Council.

It’s really hard to pick just one! If I think about a time that best represents all my memories from my time at MtA, I fall on one time, after a large snowfall. I was living in residence and my don let my friends and I borrow a bunch of sleds to go tobogganing down the hill outside the library. We had an absolute blast flying down the hill and running back up it to go again. I think it was that day that I realized I didn't have to create this mature persona for university. It was more fun to just go have fun than to try and be this grown up person that I wasn't.

5. One piece of advice you would give to your first-year self?

My first-year self could probably use a lot of advice, but one of my family’s favourite sayings (borrowed from a RIVVRS song) is ‘you are where you belong.’ In this I hear that you are where you are supposed to be. There is no sense worrying over what has happened and what will happen, because whatever it was brought you to this moment and this is the moment you are supposed to be in.