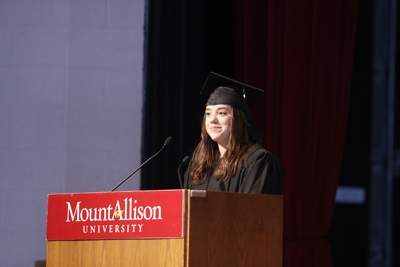 Hannah MacKellar of Stittsville, ON was chosen by her peers as the 2018 Valedictorian, delivering an emotional, humorous, and memorable address to her classmates this spring. MacKellar graduated with an honours degree in biology and will be completing field research throughout the summer. She will continue her studies in a Master’s program at Trent University this Fall.

1. Why did you decide to study biology?

I’ve always been inspired by and interested in nature. Even as a little kid I knew that I wanted to understand how the living world works, but I couldn’t decide between biochemistry and biology until my second year. I distinctly remember the moment I decided biology was the right fit for me. I had just finished a day of lectures where I learned about mating systems in pine trees in my plant biology class. I was walking to meal hall, and I remember looking at the trees on campus and realizing that the things I was learning in class were happening all around me, all the time. That’s what I love most about biology, it’s so present and accessible. I could see and experience and sometimes intuitively know what I was learning in class. It felt like I was studying something so much bigger and more important than myself or even than the species I belong to, which is a humbling and exciting lesson. Also, I feel like everyone, no matter what they study, has an innate interest and curiosity about the natural world. This is another reason I love biology so much: I’ve been able to share my passion for what I study with so many others, and in turn, they’ve shared their interests with me. Biology is something I’ll never grow tired of – because there’s always more to learn! When you look around and consider the biodiversity present even just in the waterfowl park, it’s pretty unbelievable what we have left to explore. I’m really excited to be even a small part of that exploration.

2. What’s your research focus on; what kind of field work is involved?

My research at Mount Allison focused on the feeding behaviours of two species of migratory shorebirds, Semipalmated Sandpipers and Semipalmated Plovers. Both these species breed in the Arctic and sub-Arctic and stop in New Brunswick (among other places) on their way to their overwintering grounds. I studied them during their stop in Northeastern New Brunswick to figure out what they were eating while there, how quickly they fatten up on those foods, and how that feeding behaviour might affect their overall migration behaviour. This involved lots of field work. We’d go out – usually overnight – to catch birds with mist nets (they’re kind of like huge badminton nets that birds just fly into and get caught in). Once we caught them, we’d take tiny samples of blood, put identification tags on them, and put a tracker on their back so we could see where they flew from there. I also spent a lot of time watching birds with scopes to monitor their behaviour and collecting samples of invertebrates they were feeding on. The fieldwork was hard; it was a lot of walking and patiently waiting for birds and could be exhausting at times. But, it was also the most rewarding work I’ve ever done, and I feel so grateful I had the chance to work with such an incredible group of women in science on it.

3. What were you involved in at Mount A, outside of classes, research areas?

During my time at Mount A I was lucky to be involved in all kinds of amazing clubs and societies! To start off, I was a member of the Association of Chronically Ill and Disabled Students all four years I was here, and was president in my fourth year. Through that club I did a lot of work raising awareness about accessibility issues on campus and advocating for change to make Mount A more accessible and inclusive. Next, I was on the rugby team for three years, which was a ton of fun – especially in my first year when we won the championship in triple overtime! Also, I was involved with the Sensory Motor Instructional Learning Experience (or, SMILE) all my four years here, and was very excited to have a full-time position this year and get to play with my awesome buddy, Wyatt, every Saturday morning in Amherst. And, finally, I was on the improvisational comedy team for my last three years at Mount A. We’d perform in The Pond every Wednesday, which was consistently one of the absolute best parts of my week. Aside from those long-term commitments, I was also involved in shorter term roles. In Hunton House, where I lived for my first two years, I was the academic mentor in my second year; I was an orientation leader for the past two years; I acted as social justice coordinator for the MASU and, through this position, I was one of the co-ordinators for the Feminist Leadership Conference this past year; and I also volunteered over the past year at the Westmorland Animal Hospital here in Sackville. All in all, I was really lucky to be very involved with my community here, and learned a lot through these experiences.

Wow, that’s a hard question. Between convocation, big games, fun improv shows, and handing in my thesis I feel like it’s impossible to name just one memory that was better than all the rest. But, if I had to choose, I’d have to say that one of my most stand-out memories from my time at Mount Allison was something really small and simple. I remember it was the first snowfall of my first year. Mount is so beautiful in the early stages of winter (key word: early), and me and a bunch of my friends were walking to meal hall together. I was walking alongside probably 10 or 15 people, so many of whom are now my closest friends in the world, and we were holding hands for a photograph (a picture I absolutely adore now). I just remember looking around at all of them and feeling so at home for the first time at Mount A. It just suddenly dawned on me how wonderful the community I’d found was and how lucky I was to have such wonderful friends that I could see every single day. It was such a happy, warm feeling, I’ve never forgotten it, even though it was so simple. Ever since that day, I knew that I was exactly where I belonged, and I felt so grateful to be there. I feel like a lot of people have moments like that at Mount A.

5. What’s one piece of advice you would give to your first-year self?

I think the one thing I would say to my first-year self – and to any first year really – is that it’s okay to fail. Your degree goes by incredibly quickly and being scared of failure can hold you back more than you would ever think at first. In my first year, I was always so worried that I wasn’t good enough and was scared of messing up – to the point that I chose not to try out for the improv team. But the truth is, most of my important lessons came from the failure I experienced over my four years here. For instance, when I got to Mount A I thought that I would play basketball for the Mounties. So, after I got cut from the team, I was forced to re-imagine my identity at Mount Allison and accept the fact that things don’t always turn out the way that you plan. It was really hard to accept that at first. It took me years to realize that it was okay to fail and it’s okay to change your plans because of it. Looking back on it, I see now that I was given an opportunity to explore some of my other interests, like improv and social justice, and I think it made me a better, wiser person. It’s a lesson that now I’m grateful to have learned, but initially I was devastated and couldn’t see any of the positives in getting cut from the team. If I could go back in time, I’d give my first-year self a big hug, tell them it’s okay to fail, that no one is perfect, and maybe even let them in on all the wonderful things they were about to experience.