History graduate Ben Holmes was named the 2016 recipient of the Don Norton Memorial Award, honouring the top graduating male student who, during his final year, makes the greatest overall contribution to University life. 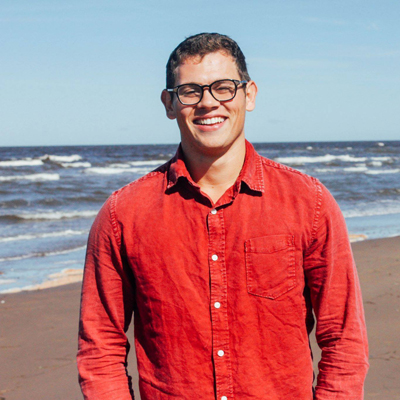 An admissions counselor came to my high school and I was sold on Mount Allison. I decided to come from that meeting. I’m from a small town (Tatamagouche, NS) and was impressed that a university would take the time to come and meet with a small group of students.

Mount Allison’s a beautiful place with so many opportunities. It was definitely the right decision for me.

I came to Mount A wanting to study economics and changed to history. Over my studies I realized I was good at it, I’m not really a numbers guy. I’m also a big fan of distribution credits; I wouldn’t have stumbled upon history if not for them. The department is very student focused, I enjoy the close relationships to professors and smaller class size.

3. What have you been involved in during your time at Mount Allison and in the community of Sackville?

After my second year I realized I wanted to do more on campus and in the community. I served as a councilor-at-large for the MASU. I got to co-host the ASCARS this year, which was a blast and was also a member of the history society, Orientation committee (as a white shirt third-year and a yellow shirt in fourth-year) and the SMILE program.

Mount Allison gave me several employment opportunities as well. I’ll be working as a camp counselor for the third summer this year and also worked as a bartender at the Pond and tutor in history for the Meighen Centre.

In Sackville I volunteered with the Youth Soccer Association last summer. It’s great to experience the community in the summer as a student.

I’m a big sports fan so I covered sports for the Argosy and hosted my own show on CHMA. I was a sports commentator for the Mounties Soccer and Basketball with Bell Aliant for the past two years.

4. You received this year’s Don Norton Award, one of the top student awards at Mount Allison. What does this honour mean to you?

It means a lot. It was really humbling to receive this award. You don’t really notice how much you’re involved in when you’re in the middle of it, balancing lots of different activities. It was nice to be recognized.

After another great summer in Sackville, I will be moving to Toronto where I’ll be starting a one-year post-graduate program in sports journalism at Centennial College. I’m really excited about this next opportunity. The program is an experiential program, I’ll be studying and working in several areas of sports journalism – broadcast, beat reporting, and then an internship. I think it will work well with my Mount Allison degree.

Bonus question: Any advice/tips for current/future students at Mount A?

For me, my four years at Mount Allison wasn’t just about the diploma at the end, there’s so much more. Academics are definitely important but there are so many amazing people and activities to get involved in. I think ‘student’ should be an all-encompassing word, academics is part of this but so are making contributions to your community, getting involved in clubs and societies that interest you, and being with friends.