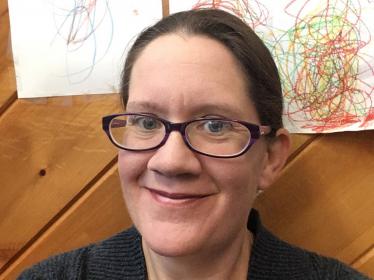 Jennie Del Motte is a part-time lecturer in music theory, musicianship, and music history.  In additional to working as a professional collaborative pianist within the music department, she is also passionate advocate of the study of all genres and styles of music, especially those we encounter most often in our daily lives.

Jennie Del Motte is a passionate advocate of the study of all genres and styles of music, especially those we encounter most often in our daily lives - not only on our playlists and in our classes, but also in grocery stores, movie theatres, and other public spheres.  She holds a B.Mus in voice and composition from Mount Allison and an M.A. (Music) from the University of Alberta specialising in musicology, music theory, and film score analysis.

A 20+-year veteran of professional theatre in the Maritimes, Jennie has served as musical director for both professional and amateur productions, with a focus on new Canadian theatre and musicals. Jennie has also worked extensively as a freelance performer, teacher and adjudicator in voice and piano, and as a collaborative pianist and vocal coach.

As a composer, Jennie has written works performed by the Vancouver Chamber Choir (Harvest Moon (2007 commission) and Wondering (1999, YCC winner)) and has written and arranged scores for a variety of theatrical productions including the world premiere of Don Hannah's There is a Land of Pure Delight (Live Bait Theatre).  She is also one of the formative members of Sing!Sing!Sackville, a pop-up community choir for singers of all ages and abilities.

Jennie is interested in the culture, meaning, and construction of music and how those forces affect the way we create and understand music both individually and commercially; some of this research was presented at Mount Allison in a 2012 talk “She Ain't Pretty, She Just Sounds That Way: Autotune and the Cult of Musical Replication.”  Current projects include a Cambridge Press book on Leonard Bernstein about the logistics of performing while conducting, and continued research on the Matt Stone/Trey Parker musical “The Book of Mormon”.

Jennie aims to make learning music (and learning about music) a vibrant and accessible language for fans of all types of music, from Elgar to Eilish to Tchaikovsky to TikTok.

Master of Arts in Music, University of Alberta, 2004

Music of, by, and about the RCMP