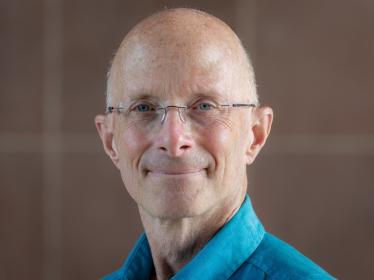 Pianist David Rogosin has performed across Canada, the American midwest, the Caribbean and France.  Praised for the brilliance, clarity and passion of his performances, he is highly regarded as a performer, adjudicator and clinician.  Aside from solo recitals, he is a frequent collaborator and chamber player, and has a particular interest in the two-piano repertoire.

A passionate teacher and exponent of new music, Rogosin’s lecture-recitals on 20th-century composers such as Messiaen, Dallapicolla, Scriabin and Southam have been heard at national and international conferences, and have been extremely well-received by the public.  In 2013 he was awarded Mount Allison’s Paul Paré Excellence Award for his performance activities, and in 2019 was named the Pickard-Bell Memorial Chair in Music in recognition of an “outstanding record of research and commitment to teaching.”

Rogosin has released two solo CDs, Incandescence (2005) and Evocation (2012).  The first featured the music of Messiaen (Vingt Regards sur l’Enfant-Jésus, subject of his doctoral thesis), Brahms, Bartók and Dallapicolla, and garnered much praise and airplay on CBC.  The second, nominated for an ECMA “Classical Recording of the Year” award in 2013, features the music of Scarlatti, Haydn, Albéniz, Mompou, Ravel, Morel and Southam.  A third, a chronological survey of works in variation form from the past 400 years, will be released by Leaf Music in March 2023.

His passion for performance and analysis carries over into his studio teaching which focuses on three areas:

Clarity of line and texture, richness and variety of pianistic sonorities, and musical expressivity are constantly refined during lessons, and students explore these concepts through repertoire spanning more than 300 years of music history.  The training of a keen ear and the ability to improvise are also central to this creative act, and are developed through the study of keyboard harmony.

Outside the classical realm, jazz and world music have been lifelong interests, and have become teaching and performance areas as well.  Dr. Rogosin was chair of Mount Allison University’s Performing Arts Series from 2005-2016, presenting varied concerts of classical music, folk, world music and jazz, as well as classical and modern dance, in Convocation Hall and Brunton Auditorium.

Outside of music, Rogosin holds the rank of shodan in Aikido, and the practice of this art has influenced both his playing and his studio teaching.  He was the founder and instructor of Campus Aikido from 2015-2019.

My primary objective is to help students understand the complexities and nuances of a musical score, and to give them the tools to help realize their own unique interpretations.  At the same time, most of what we learn about any art is absorbed through direct experience, so I feel that my role as a performer on stage is an essential and vital element in each student’s growth, and an important supplement to classroom teaching.  Hopefully my concerts and recordings will inspire and motivate students on their own paths, as performance and the mastery of an instrument require an unparalleled dedication and perseverance.

A passion for both performance and analysis carry over into my studio teaching, which focuses on three areas:
1.  the technical foundations of piano playing
2.  a thorough understanding of the musical score
3.  how these two merge in the spontaneous act of performance.

Clarity of line and texture, richness and variety of pianistic sonorities, and musical expressivity are constantly refined during lessons, and students explore these concepts through repertoire spanning more than 300 years of music history.  The training of a keen ear and the ability to improvise are also central to this creative act, and are developed through the study of keyboard harmony.

Above all, Dr. Rogosin is deeply committed to teaching, as many students and colleagues have attested.  Here are some comments from former students.

“I count you as one of the very special and influential people of my life.”
- Jessica Wise (B.Mus 2003)

“Your 20th-century history class was my favourite — you are a fantastic lecturer!”
- Samara Ripley (B.Mus, Mount Allison, 2014)

“David possesses the generosity of spirit, sense of wonder, attention to detail, and openness necessary to be a true artist-teacher.”
- Michael Thibodeau (B.Mus, Mount Allison, 2009)

“The Keyboard Harmony course was one of the most practical and useful courses of my undergraduate degree.  He did not just teach me the skills, but rather guided my learning and encouraged me to make my own discoveries along the way.”
- Emily Logan (B.Mus, Mount Allison, 2011)

“You, more than any other piano teacher I’ve had, helped me learn how to break things down and solve them.  I count you as one of the very special and influential people in my life.”
- Jessica Wise (B.Mus, Mount Allison, 2003)

“Dr. Rogosin’s encouraging, caring, pleasant and humorous nature made my lessons a joy.  His work in a very detailed and precise manner was a great contrast to my haphazard approach.  Thank you for many wonderful years of instruction.”
- Anonymous Mount Allison course evaluation

“Very enthusiastic and engaging professor with a variety of interesting ideas and approaches.  My favourite teacher at MTA.”
- Anonymous Mount Allison course evaluation

“Dr. Rogosin is a fantastic professor and had great enthusiasm and knowledge of the subject.  His method of teaching is extremely effective.”
- Anonymous Mount Allison course evaluation

“This was probably the best class I’ve taken during my two years at Mt. A.  I looked forward to coming to music history because of Dr. Rogosin’s enthusiasm and energy.”
- Anonymous Mount Allison course evaluation

“David came to Knox bringing with him an enthusiasm that has permeated the entire music department.  Despite the tedious nature of music theory, David's sense of humor energizes students to enjoy what was once considered boring.  He has also revitalized his fellow music professors, sparking a sense of camaraderie through performance.  Whether he is performing as Dr. Chocolate with student-generated bands or lecturing on augmented sixth chords, his great love for music and teaching is apparent to all.”
- Meghan Rutledge, music major, Knox College (2001)

“Professor Rogosin brings to the class some invaluable qualities: an honest curiosity, an ability to facilitate strong discussion, a broad knowledge and love of music, and a sense of humor that makes you look forward to his classes.  Furthermore, he is relentless when it comes to assuring that every student gets the most out of his already fun and effective classes.”
- Rory Parilac, history major, Knox College (2001)

“Mr. Rogosin has the ability to make difficult classes such as Music Theory III and Baroque Music History into entertainingly educational experiences.  As a knowledgeable professor he is such a demanding presence that you always want to do your best.  As a person he is approachable and amicable; he's always willing to help students with academic or personal problems, and he's generous with his time.”
- Ron Cristobal, music major, Knox College (2001)

“Thanks again for all your hard work with me.  Your 20th-century theory and history courses [at Brandon University] prepared me very very well for grad school.  I took a Schenkerian analysis course in my last semester at ASU, and thanks to you and Pat Carrabré I seemed to have a leg up on everybody else in the class.  Thanks for preparing me so well for grad school.”
- Christopher Wolf, Instructor, Manitoba Conservatory of Music and Arts (2004)

Dr. Rogosin’s research interests cover all aspects of piano performance, from solo recitals to collaborative and chamber playing, and he particularly enjoys the two-piano medium.  Olivier Messiaen’s 1944 masterwork, Vingt Regards sur l’Enfant-Jésus, was the subject of his doctoral thesis, and formed part of many subsequent recitals and a recording.  In 2008 he performed Messiaen’s two-piano magnum opus, Visions de l’Amen, with pianist Barbara Pritchard.

Aside from live performance, Rogosin has pursued several recording projects, both as soloist and as a collaborative musician.  In December 2019 he was soloist with the Mount Allison Chamber Orchestra under the baton of Dr. Gregory Burton, playing Mozart’s Concerto No. 23 in A major, K. 488.

Following the variations CD to be released in early 2023, there are two projects in the works. The first is a 2-piano concert with colleague Stephen Runge featuring works by John Adams and Sergei Rachmaninov. The second is a recital/recording project of Ludus Tonalis, a series of Interludes and Fugues composed by Paul Hindemith in 1942.

Rogosin is also an avid improviser, and first performed in the Rogosin Jazz Trio in 2014, with other concerts to come.