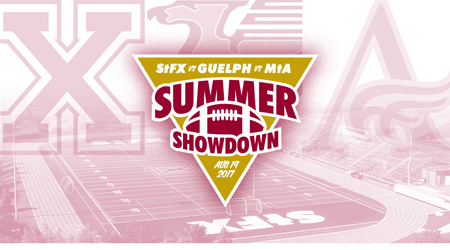 The three teams will compete at StFX Oland Stadium in an exhibition event featuring six mini games over the course of the afternoon. The Summer Showdown begins at 12 p.m. and will see each squad play four mini games/quarters. It will be a showcase of U SPORTS football talent with three championship teams on the gridiron. Mount Allison were AUS champions in 2013 and 2014, followed by the X-Men in 2015 and 2016, while Guelph captured the OUA championship banner in 2015.

The first mini game of the afternoon has StFX playing against Guelph, followed by Mount Allison versus Guelph, then AUS rivals StFX and Mount Allison. Each team will have a chance to kick-off and receive in the opening three mini games, which will be 15 or 20 minutes in duration. As the scoreboard resets for each game, the next trio of mini games will again feature StFX vs Guelph, Mount Allison vs Guelph, and StFX vs Mount Allison.

In other AUS exhibition play, the Saint Mary’s Huskies will travel to Wolfville, NS to face the Acadia Axemen, also on Aug. 19. Kick-off is scheduled for 2 p.m. The fifth and newest member of the AUS football conference, the Bishop’s Gaiters, will not be competing in a pre-season exhibition game.

Mounties head coach Scott Brady is very excited for the opportunity to compete against two great teams in the pre-season.

“It will be a fun experience for our players to compete against a new opponent, as well as renew our rivalry with a great StFX team,” he says. “Between our programs, we have won five conference championships in the past four seasons. I have always believed that playing the best possible competition will only improve our team and I am excited to watch three great programs go head-to-head this August.”

Likewise, Gryphons head coach Kevin MacNeill states, “We are extremely excited to be traveling to Antigonish to participate in this three-team exhibition showdown. With Mount Allison and StFX winning each of the last four AUS titles, we know that our players will be in for a tough challenge against some great opposition. This will be an outstanding test for our players as we build towards the 2017 regular season.”

Third-year Mounties linebacker Damian Halstead (Brampton, ON), an AUS defensive all-star, is excited for the opportunity to play in a non-conference exhibition game against Guelph and StFX.

The Mounties finished the 2016 season with a 3-5 record in second place behind the first place X-Men (7-1). After defeating Acadia 27-18 in the AUS semifinal, they fell 29-8 to the X-Men in the AUS Loney Bowl championship. The X-Men went on to compete in the U SPORTS national semifinal Mitchell Bowl in Calgary, dropping a 50-24 game to the Dinos.

Tickets for the Summer Showdown will go on sale in mid-July through the StFX Keating Centre box office and online at www.goxgo.ca/tickets