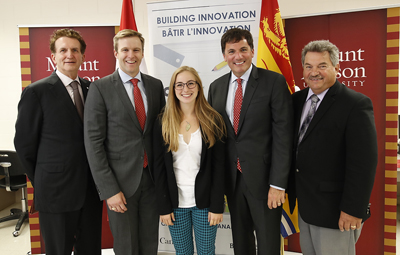 SACKVILLE, NB — Mount Allison University will be home to a world-class research facility for environmental science as well as improved athletics resources with a multi-million dollar announcement in new funding through the Strategic Investment Fund (SIF) Program and the Canada 150 Community Infrastructure Program.

The investments announced today will help establish the Centre for Environmental Innovation at Mount Allison as well as assist with enhancements to the Alumni Field facilities on campus.

The funding was announced by the Honourable Dominic LeBlanc, Minister of Fisheries, Oceans and the Canadian Coast Guard and Member of Parliament for Beauséjour, on behalf of the Honourable Navdeep Bains, Minister of Innovation, Science and Economic Development, and by the Honourable Brian Gallant, Premier of New Brunswick. Memramcook-Tantramar MLA Bernard LeBlanc and Mount Allison University President and Vice-Chancellor Dr. Robert Campbell were also in attendance. 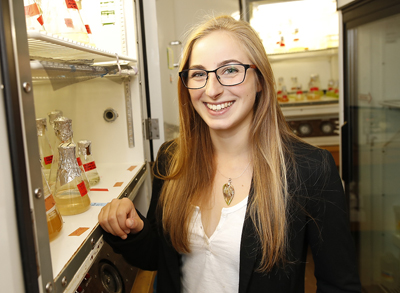 “The new Centre for Environmental Innovation will have a significant positive impact for our faculty and student researchers. Mount Allison has a proud tradition of offering students a high quality, hands-on educational and research experience and investments like these help make that possible,” says Mount Allison University President and Vice-Chancellor Dr. Robert Campbell. “Our Alumni Field facility, with its recent improvements, helps to support our campus experience with a proven commitment to our students’ overall health and interests in and outside the classroom. We thank the federal and provincial governments for their support and investment in these campus facilities at Mount Allison University.”

The funding through the SIF program will establish an environmental innovation and research facility at Mount Allison, bringing 15 scientists whose work focuses on environmental and life sciences together in one central location. Of the $13-million investment, $6.5 million will come from the federal government and $3.25 million from the Province of New Brunswick. Mount Allison University will contribute an additional $3.25 million. 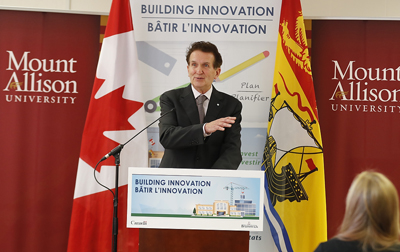 Today’s announcement also includes funding under the Canada 150 Community Infrastructure Program. The Government of Canada is investing $250,000 to upgrade the athletic field at Mount Allison University, with the Province of New Brunswick and Mount Allison University also contributing $250,000 each toward the project. Mount Allison’s portion has been acquired primarily through fund raising by the University. The improvements involve installing new bleachers and a scoreboard, among other upgrades.

“This project will support industry here in Atlantic Canada and contribute to building a vibrant economic future by helping grow the middle class and address regional challenges. Through the Strategic Investment Fund, we are supporting innovation to help improve opportunities for business, create jobs in the Atlantic region and contribute to Atlantic Canada’s reputation as an innovation hub,” says Dominic LeBlanc, Minister of Fisheries, Oceans and the Canadian Coast Guard and Member of Parliament for Beauséjour. “Additionally, the Government of Canada believes that strategic infrastructure projects to upgrade recreational facilities are key to helping create new opportunities and strengthen regional economies.”

“By working with the Trudeau government, we are getting things done to advance the priorities of New Brunswickers such as the economy, education, and health care,” says Premier Brian Gallant. “This investment will allow our province to enhance its research capacity, which is important for the economy.”

The Centre for Environmental Innovation will be housed in the existing Gairdner Building, located at the heart of Mount Allison’s campus. The renovated facility will allow for increased research collaboration and facilitate the study of the effects of changing climate and pollutants on marine and freshwater eco-systems.

Along with the new Centre, Mount Allison’s Barclay Building, housing the Department of Chemistry and Biochemistry, will also see upgrades to its labs and infrastructure, improving facilities and building efficiencies.

The Centre for Environmental Innovation at Mount Allison University

The Centre for Environmental Innovation will see the renovation of two existing facilities on campus to establish a world-class facility with a focus on environmental science.

The facility will consolidate research for 15 scientists whose work focuses on environmental and life sciences, as well as their students and collaborators.

The project is supported through the Strategic Investment Fund with the federal government contributing $6.5 million and the Government of New Brunswick and Mount Allison University each contributing $3.25 million.

Phase 2 of the project, which includes the installation of new bleachers, a scoreboard, a press box, and other upgrades is currently being completed. The University has received $250,000 from the federal government through the Canada 150 Community Infrastructure Program and $250,000 from the Government of New Brunswick. The University is also contributing a matching $250,000, the majority of which will be covered by a successful fund raising campaign.