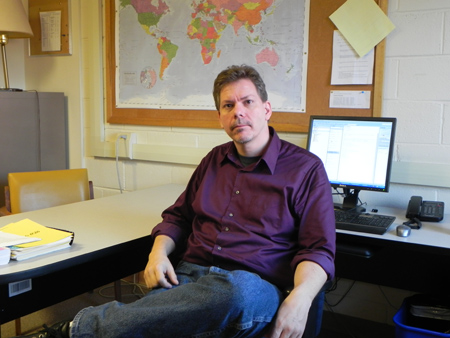 As part of his class, International Politics of the Middle East, Mount Allison political science professor Dr. James Devine has organized a symposium of regional experts on the Middle East.

‘After ISIS?: Regional and Domestic Political Dynamics in a Changing Middle East,’ will take place on Friday, March 16 beginning at 12:30 p.m. in the Avard-Dixon building (room 112), 144 Main Street. It is open to the public.

“There have been many changes. I think a lot of people have been expecting that the defeat of ISIS in Syria would mean that there would be some sort of peace in the Middle East,” says Devine. “That has not been the case and, if anything, many things have got worse.”

The symposium consists of two panels with the first covering “The Arab Spring Before and After the Islamic State.” Dr. Jamie Whidden will talk about revolution and counter-revolutions in Egypt. Dr. Jeffrey Sachs will cover authoritarianism and judicial politics in Egypt, and Devine will cover contemporary political unrest in Iran. Sachs and Whidden are both from Acadia University.

In the second panel, “Regional Security after Raqqa, has Anything Changed?”, Dr. Shaun Narine (St. Thomas University) will discuss Canada and the Middle East, Dr. Can Mutlu (Acadia) will focus on Turkish involvement in Syria, and Dr. Philip Leech-Ngo Phil (UNBSJ) will cover Israel and the Palestinians.

“The students will hear some different perspectives on the issues we have been talking about in class,” says Devine. “The panels’ subject matters are a little broader than what we have been discussing so they will be hearing about different issues as well.”

Devine says the event is a good chance to bring scholars together.

“I saw an opportunity do some community-building among scholars with similar interests in the region. There are not a lot of people in the Maritimes who do research on the Middle East or security-related issues in the developing world.”

For more detailed information on the symposium, visit mta.ca/events