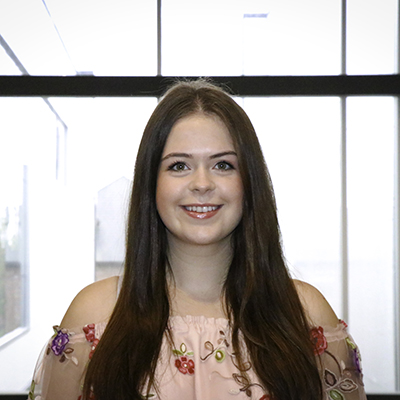 “Throughout the summer, I realized that first-generation support and resources would be presented in a different way and it wasn’t a reliable environment to study,” she says. “I became interested in the adaptation to online learning and persistence in online education and how that relates to first-year students.”

“I really enjoyed the program and what it means and how that has impacted my growth through university,” she says.

O’ Connor says coming from a francophone school district, there were basic academic skills she needed to learn when she arrived at Mount Allison such as essay writing. There were also a number of other gaps that needed to be filled, such as how to access financial aid and how to get involved in the university community in general.

O’ Connor will continue her research throughout the academic year for her honours psychology thesis. Through online surveys, she will reach out to first-year students to gauge their integration and persistence with the online learning environment.

“Everyone’s social experiences are different,” she says. “So I’m expecting to see differences in how people respond. First-generation students also have lower levels of persistence and social integration in general, so I’m also expecting that to show up in my research.”

O’Connor’s faculty supervisor, Dr. Jennifer Tomes, says she is impressed how well O’Connor adapted to the many changes in her project.

“Often researchers do not have the time to quickly pivot their research to take advantage of rapid changes happening in the world,” says Tomes. “But Caitlin had the time and resources, thanks to her independent summer research grant, to adapt her project in the face of what was happening in the world and she has developed a very timely and interesting research project. I think this is a great example of how these types of awards not only support students, but also the larger scientific community.”

O’Connor is grateful to have had this research opportunity.

“This study could have benefits for advancing our understanding of the unique situation university students are facing while beginning their higher education during the pandemic,” she says. “It may help us identify how we can better support the social integration and persistence of university students in both traditional and online education and it may give us more insight into the challenges first-generation students are facing.”

O’Connor has been highly involved in the university community throughout her time at Mount Allison. This year she is president of the Psychology Society and Rotoract MtA and is associate director of bilingual theatre troupe, Tintamarre. She has participated in 12 theatre productions and has also been involved with the MASU, Shinerama, the Improv Team, and tutoring at the elementary school.

After graduation, O’Connor plans to pursue speech language pathology, bringing together both her psychology and drama training from Mount Allison.