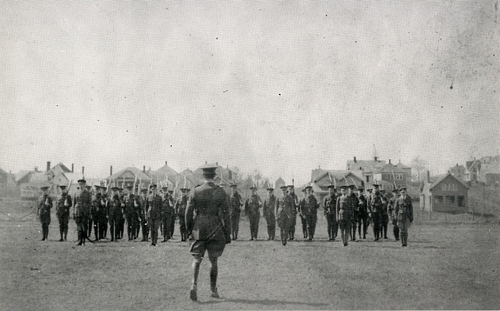 1916 : Keep the Faith, Keep in Touch, Keep the Home Fires Burning will be staged in the Motyer-Fancy Theatre, located in the Purdy Crawford Centre for the Arts, on Thursday, Nov. 3 at 8 p.m., and Friday, Nov. 11 at 3 p.m.

This is the third stage of a project commemorating the role played by Allisonians and citizens of the Tantramar who rallied to meet the challenges of the First World War.

Once more, professor emeritus Alex Fancy has devised the script, which is comprised of news, articles, and testimonials that appeared in three local newspapers during the First World War: The Sackville Post, The Sackville Tribune, and the Argosy.

“Documents from 1916 are no less engaging and moving than those which appeared in the two previous years, 1914 and 1915,” says Fancy, who also directs the production. He adds that 1916 was marked by remarkable resilience in the face of a growing realization that the war would not end soon. “There was also a growing need to see humour even when the world was falling apart,” he says.

It was a year of tearful departures and joyful reunions, shattered innocence and unimaginable experiences.

Liam Cole, from Port Elgin, is reading this year for the third time, and says he is proud of our ancestors who “fought the good fight.”

“There is no proof more dramatic that reality can be stranger than fiction,” Cole says.

As in the past, the readers are Mount Allison students as well as members of the community, and music will once again be performed by Jennie Del Motte.

There will be a freewill donation in support of the Sackville Citizens’ Band, which performed frequently during the war years: at departures of soldiers and nurses from the Sackville train station, patriotic concerts, recruitment meetings, visits of troops and dignitaries to Sackville, carnivals, and many fund raisers.

The show lasts approximately 65 minutes. There is no reserved seating.

Photo caption: Mount Allison student cadets drill on the football field at the University during the First World War.