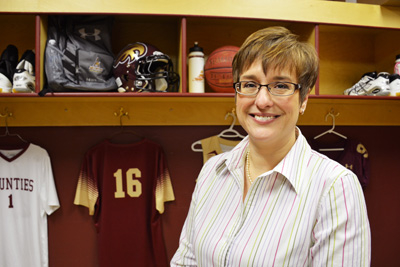 SACKVILLE, NB — Mount Allison University Psychology Professor Dr. Jennifer Tomes, along with several students and recent alumni, is seeking to find out more about concussions and the long-term effects that can come with them.

“I study memory but began my work on concussions because of a student (Nicole Barry, now a Master’s student at Brock) about four years ago,” says Tomes. “We found that there was very little research looking at long-term memory and concussions.”

The pair decided to look into this as a research topic for Barry’s honours thesis. Their paper, Remembering your past: The effects of concussion on autobiographical memory recall, was recently published in the Journal of Clinical and Experimental Neuropsychology.

Tomes and Barry’s study found subtle changes in long-term, autobiographical (remembering past events from your own viewpoint) memory recall between participants who had suffered a concussion versus those who did not.

“Those who had a concussion, even from as far back as 10 years ago, were able to recall the same number of memories, but with less detail,” says Tomes. “This shows that the impact of a concussion can be much longer than most people may think.”

Along with her academic research, Tomes has also worked with Mount Allison’s Department of Athletics and Recreation, The Meighen Centre for Learning Assistance and Research, and the University Senate Committee on Students with Disabilities to develop a return to school protocol and brochure about concussions. Resources were designed to provide information to both the concussed student and their professors.

“For me, it was a way to give back to many of the students who have participated in our studies on campus. I think education, for everyone, is key to preventing and monitoring concussions,” says Tomes. “Concussions are not limited to athletes and it’s important that students, and others, recognize the various symptoms concussions can present and take the proper time to recover, both physically and mentally.”

The brochure is modeled on the return to play protocol already in place for Mount Allison University student-athletes, but seeks to expand on both the physical and cognitive aspects of concussion recovery.

“There’s a lot of stigma around concussions, that they aren’t real injuries. This is a health problem that needs to be taken seriously,” says Tomes. “There needs to be proper time for healing, just like if you have a broken bone. Injuries are going to happen; education around concussions can only help those recovering.”