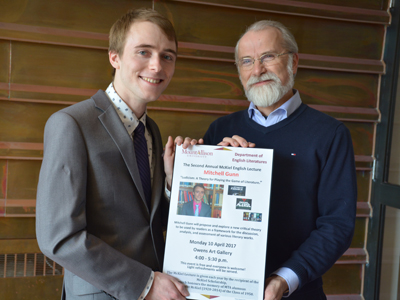 1- Why did you choose Mount A?

My sister was a Fine Arts student and she really liked it and gave rave reviews. I came to see the campus and the town. It just seemed like the right place from the start. I was enchanted by the small-town atmosphere.

2- What are you involved in on campus?

I have been a member of the Improv Team for four years as well as the bilingual theatre troupe, Tintamarre. This past semester I was involved in a one-act production at the Motyer-Fancy Theatre called These Last Four Years. In my first year I wrote for the student newspaper, the Argosy, had my own CHMA radio show, and was on a couple of different academic societies in disciplines I wasn’t even taking. I did swing dance for a while. One exciting thing about Mount A is that you get to try everything.

3- You were awarded the $5,000 McKiel Scholarship from the Department of English. What did this honour mean to you?

I have come to realize how much English matters to me and how lacking my academic experience would have been had I not studied it. I have tried to branch out so much with it, from the theatre side to creative writing. Last year I was awarded one of the Crake Arts Internships and self-published a collection of poetry on the concept of home. So it has been a huge part of my time here at Mount Allison and this felt like an exciting capstone to that — like this was the sort of experience that it was all leading up to.

4- What was the topic of your McKiel Lecture?

When awarded the McKiel Scholarship you choose a topic and present a lecture on your research at the end of the year. The first recipient was an honours student, so she presented her thesis. It felt like a big challenge, but it was so exciting to pick whatever I wanted.

From the start I have been really interested in the act of storytelling or communicating meaning. I was interested in the new ways we tell stories — film, television, games — and ways to interact with stories. I started looking at how the interactivity contributes to the story. We have been interacting with our stories from the first stories — picking up the book and turning the pages. If you decide to do nothing while watching a movie, the movie keeps going. With a book or video game or more interactive media, if you stop interacting, the story stops. The book that inspired this is House of Leaves. The author makes you aware of the act of turning the page and you feel guilty because you turned the page and made something happen. That is what I wanted to explore as the foundation.

I did a lot of research on media studies, especially with video games. I developed a literary theory that addresses this interactivity called “ludicism" from the Latin ludis meaning game or play. The main core is that any time you pick up a book or literary work, you are playing a game. The author or creator is not your opponent because the goal is collaborative, but you are working on strategies and mechanics to achieve your goal.

Along with the McKiel Lecture, I was also able to present this work at the Annual Atlantic Undergrad English Conference (AAUEC) in PEI in March.

I will be taking a Master in English in Creative Writing at the University of Toronto next year. A dream that I have had since I was a kid is to be a published author. I think that would be a wonderful career, to do something I love so much.