In a year defined by “self-isolation” and “physical distancing,” Canadians of 2020 were due for a dose of that which brings us together — a sense of unity, an inside joke.

Perhaps it’s partially on account of this heightened state of solitude that when we found our adhesive, it cemented us all the swifter. Crazy glue for the country’s healing heart. One needed to look no further than social media feeds populated with “Ew, David” memes, to know something special was happening. 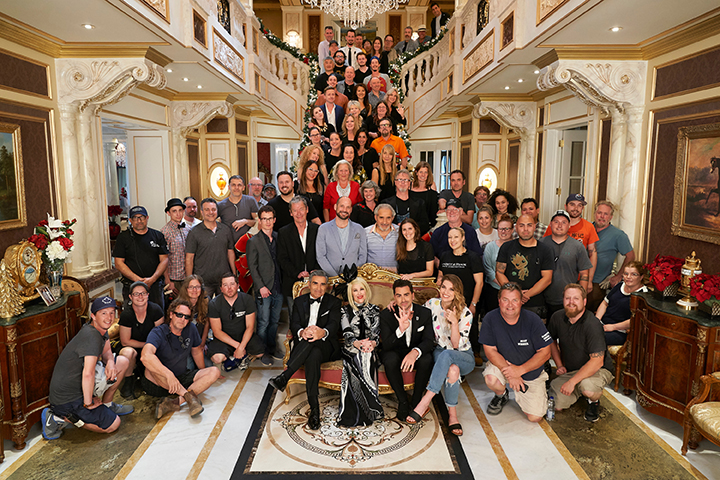 The simplicity of that word-pairing was evidence that, while the world adjusted to COVID-related loss, Canada had something uniquely ours to make us laugh. Those who got it, got it — and there are millions of us who did (and still do). We fell head over heels and, in doing so, claimed homegrown uber-success Schitt’s Creek as our own.

With each episode over six seasons somehow funnier, smarter, and more endearing than the last, over time Schitt’s Creek awoke in Canadians that rarely seen propensity to chest-thump. (Look at our talent! Look at our relevance!) As Canuck-types, we’re more likely to apologize than self-aggrandize. But with the growing global appetite for all things Schitt’s Creek, those norms went flying out the motel room window.

While citizens planet-wide were advised to stay home, hunker down, and — to quote current jargon — Netflix-and-chill, five years after its initial release the rest of the world caught on. They too fell hard — like, tipping-point hard.

So when I learn I’ll be profiling Schitt’s Creek executive producer — and Allisonian, to boot — Andrew Barnsley, I do what any self-respecting member of the 21st-century would: I Google him.

His Instagram handle identifies him as a TV producer (we’ll get to that), a dad — he and wife Christine are parents to 15-year-old Olivier and 11-year-old Raphaelle — and a bon vivant. As for that last bit, suffice to say he’s had plenty of reason to pop the Moët. With nine Emmy wins in 2020 alone and two Golden Globe wins (with five nominations), the cast and crew are doing what Twyla, the waitress on Schitt’s Creek, does after a shift at Café Tropical. They’re cleaning up.

As is often the case as it pertains to Mount Allison, when I see his photo I recognize him. I know we’ve met. But the details I place as having been at a party in 1992 are blurred. (This has more to do with age than with Barbarian cooler intake.) Nearly 30 years later, without the distinctly Mount A soundtrack of the Tragically Hip blaring in the background, we meet today over Zoom.

We laugh about the early 1990s and he talks fondly about life at Thornton House.

“Those are very special moments,” he tells me. “You don’t realize you’re going to miss them, but you do. The innocence of it all. The closeness.”

I agree, on all fronts.

While the Andrew Barnsley I speak with in 2021 is clearly whip smart, kooky accomplished, and wonderfully personable, former Mount Allison president (1991–2001) and long-time Barnsley family friend, Dr. Ian Newbould, confirms this is nothing new.

“He was a really positive person, always smiling and happy,” he tells me. “It isn't a surprise that he has done so well. Andrew's success has been exceptional.”

This is, after all, the guy who was an integral part of the team behind the first Canadian program to join the ranks of iconic shows like I Love Lucy, MASH, All in the Family, and Seinfeld as recipient of the Emmy for Outstanding Comedy Series. So, yes. Exceptional.

Not unlike the TV program that has filled his trophy case, so too is Barnsley as Canadian as they come. Born in Alberta, he moved to Nova Scotia when he was 12, ultimately crediting his love for comedy as being partly due to that chapter.

“When I moved across the country, it was a tough time,” he says. “Having the ability to laugh when you’re sad… I knew how healing it could be.”

In high school, he was active in student leadership, serving as both grad class president and organizer of the inaugural Nova Scotia Secondary School Students’ Association conference with co-founder and then-future Mount Allison alum Mark Fraser ('94). Reflecting on the magnitude of what they pulled off, Fraser identifies their accomplishments as the product of good old-fashioned gumption and naiveté.

“Since no one told us we couldn’t do it, we did it,” Fraser tells me. “We should have known that Andrew would go off to do something big and impressive. He had a keen eye for opportunity.”

It was in this vein that Barnsley eventually sought out a university.

“Mount Allison had so much going for it,” he says. “And I wanted to flex my leadership muscles.”

Admittedly, his time at Mount Allison was about figuring out who he was.

“I was looking for something to speak to me,” he says. “I knew I had drive. I just needed that spark, and I took it upon myself to find it.”

Mount A provided the ideal environment for self-exploration.

Since 1991, Mount Allison has earned top spot in the annual Maclean’s magazine university rankings a staggering 22 times, and this ranking held true in the fall of 1994. Barnsley recalls leafing through that year’s issue.

“I took it back to my apartment and saw there was a program in television production at Ryerson,” he says. “All of a sudden, it clicked for me.”

He laughs recognizing the irony that, in a moment of Mountie pride, he stumbled upon his next stepping stone.

When he eventually arrived in Toronto, it was, he says: “a game changer.” (Despite agreeing that the garlic fingers at Joey’s in Sackville were “next level”, even the culinary scene in his new city hooked him.) He would ultimately obtain both a bachelor's and a master’s degree, in radio and television arts and in communications and culture respectively.

He became a self-professed "comedy nerd", a regular fixture in the audience of Toronto’s improv and stand-up scenes, ultimately solidifying relationships within that community.

“I tell students I work with today, 'Instead of finding your first job, figure out ways to build your network,'” he says.

Of those days on the precipice of launching his career, he admits: “I didn’t know what I was doing, but was willing to figure it out.”

And after accumulating a growing list of television credits, including executive producer on Spun Out starring Dave Foley, he recalls a pivotal evening at a baseball game with friend and mentor Peter Sussman, former CEO of Alliance Atlantis.

“It was the end of the eighth inning and Peter said, ‘I have a friend who has an idea for a show that I really like. Do you think you could come on board and help?’”

Then Peter added, “My friend is Eugene Levy and the show is called Schitt’s Creek.”

“Eugene Levy was a hero of mine,” Barnsley says — and I get that. He’s as close to Canadian royalty as there is.

“A couple weeks later, I meet with Eugene and we were like, ‘Let’s do it.’ And it just kind of rolled out,” he says.

As for the point at which he realized they had captured lightning in a bottle, I ask him about this and he’s humble.

“When you see it on the set, you’re like, 'This is funny,'” he says. “But you don’t know it’s going to connect with people until it’s out there.”

There’s a shift that occurs during the progression of the series. It creeps up and coyly does its thing. We find ourselves cheering for the irresistibly imperfect Rose family — a family who, initially, has very few redeeming qualities. But it happens. Schitt’s Creek seemed to marinate in its own blend of seasoned talent and fresh perspective, and viewers ate it up. 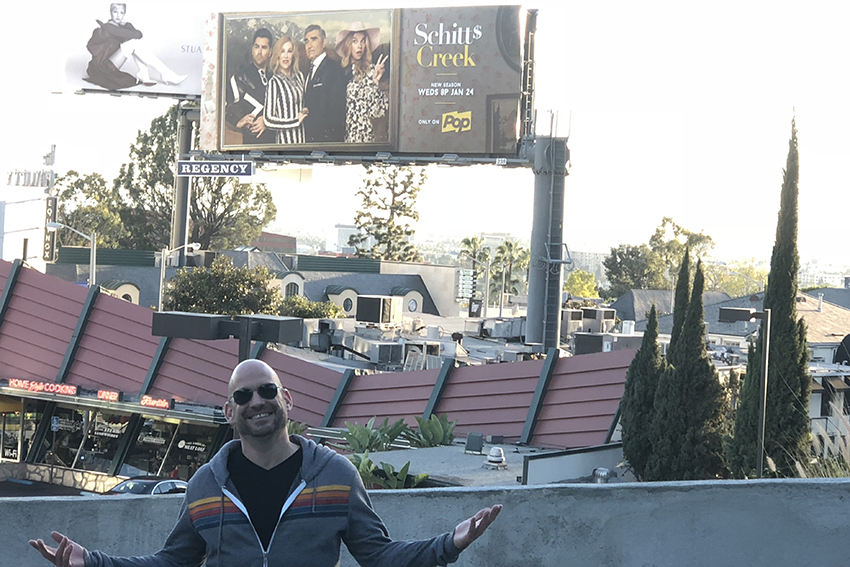 “The show cared too much to take the easy path,” says Fraser, an admitted avid fan. “It got better and better as the series carried on.”

“Comedy is a Trojan Horse for big ideas,” Barnsley says, recognizing the cultural significance of Schitt’s Creek as both a conversation-starter and a conversation-changer. “It allows you to cover things in a palatable way. We covered themes like sexuality, self-identity, class, and family. I take pride in that.”

In keeping with this, I invite him to share a favourite Schitt’s Creek memory and am half-expecting a story that revolves around winning gold statuettes.

Instead, he says, “It’s my daughter holding the Schitt’s Creek banner walking down Yonge Street during Pride Parade with the cast and crew. That stuff is pretty powerful.”

I ask what he learned working with SCTV alum Eugene Levy and Catherine O’Hara. (How could I not? After all, if Eugene is our King, then Catherine is our Queen.)

“The importance of aiming higher — as a way to motivate yourself, and to not short-change yourself," he says. "A way to set goals and standards and to hold yourself accountable.” 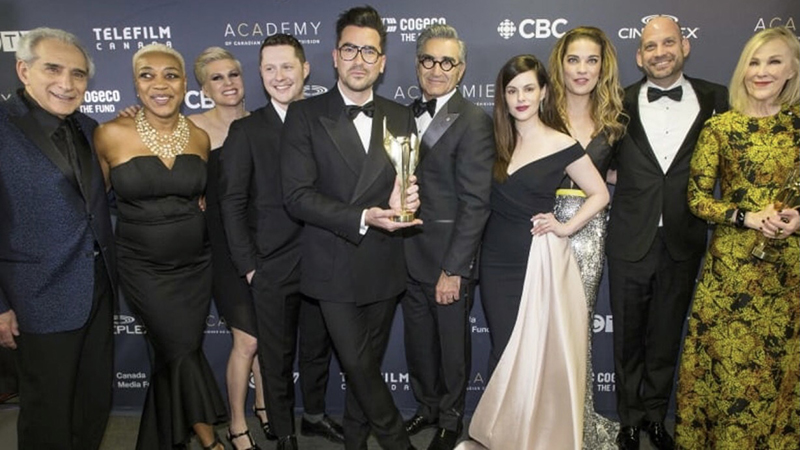 Those lessons paid off, and then some.

On the night of the 72nd Primetime Emmy Awards, cast and crew hosted a socially-distanced dinner at Toronto’s Casa Loma during the broadcast. By the time they clinked flutes for the last time, they’d garnered the most Emmy wins for a comedy in a single season.

Before we wrap our chat, I ask what advice he’d share with recent, or even not-so-recent, Mount Allison graduates on the quest to fulfill professional aspirations. Barnsley's answer draws upon that which he learned from Canadian royalty.

There’s something lovely in knowing that the laughter that we needed this past year came to us, in large part, from the contributions of someone who once walked the meandering paths of a charming little university nestled in the Tantramar Marshes.