It had to be in the country and it had to have a bit of land. It had to be sustainable and durable, with a low carbon footprint both for construction and operation.

But most of all, it had to be beautiful.

These were the checkboxes Wes and Julie Hanson were looking to cross off when they began researching home-building options.

After looking at energy-efficient homes and alternative construction like straw bale houses, they toured Ontario’s first rammed earth house and knew they had found what they were looking for. 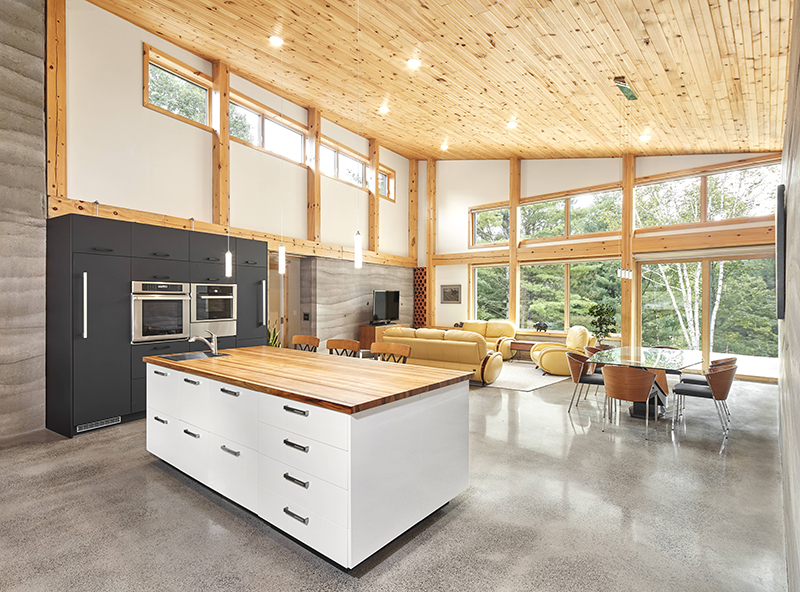 “Rammed earth is extensively used throughout the desert regions of the world, but has not been adopted in Canada because we have had cheaper energy available to us,” Wes says. “There is an increasing movement in Canada to build more energy-efficient homes, but for most Canadian families, rammed earth would not come up because people just haven’t heard of it.”

The building technique has been around for thousands of years — parts of the Great Wall of China were built with rammed earth — and is popular in Australia and the southwestern U.S.

“I did my Bachelor of Science in geology, which is another reason why rammed earth appealed,” says Wes, a geologist who works in the mining industry. “It’s basically a house that is formed from dirt, for lack of a better description. It is about 95 per cent gravel, five per cent Portland cement, a bit of water, and some colour to taste.”

The walls are built by compacting 12 to 18 inches of dirt at a time within a set of forms that are later removed, creating a distinctive pattern that makes each rammed earth home one-of-a-kind.

“The walls are like a work of art,” Wes says. “You can customize the pattern and the colour of the individual layers and we added a lot of fossils and amethyst and turquoise, which makes it even more unique.” 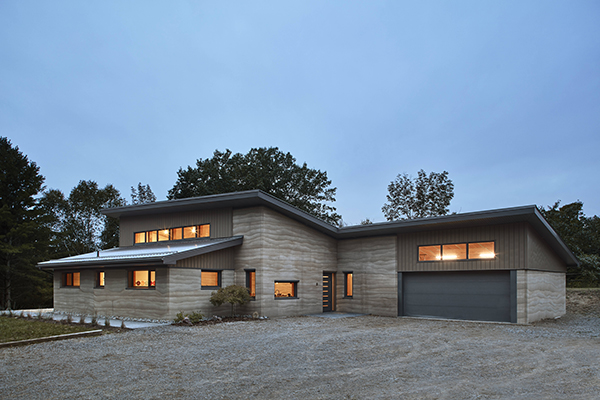 The Hansons’ home, located near Castleton, ON, has 20-inch thick walls, which contain six inches of foam insulation, giving the walls an R40 value. Wes says their heating costs are about a third of what is typical. An interior feature wall also helps with heating — soaking up heat during the day, then releasing it during the cooler nights.

“The walls change colour depending on the time of day and time of year,” he says. “It looks totally different in spring than fall and on a sunny day compared to a cloudy day.”

While a little more expensive to build than conventional housing, rammed earth homes also come with the benefit of being virtually maintenance-free.

“The house is fire-proof and wind-proof, and rodent-proof; the walls breathe, so they regulate humidity; and the air quality is better than what you would get in a house with drywall,” Wes says, noting the lack of paint and drywall also eliminates many of the toxins found in homes.

“And it is maintenance-free — I don’t have to paint or repair siding or do the things most typical homeowners deal with. This is the future of housing. If someone is thinking of building their own home, this is definitely an option they may want to consider.”

Take a video tour of the Hansons' home with CBC Life.

class of 1981 class of 1982 science climate and sustainability ontario