The story of the graduating class cane
By: Melissa Lombard

The tradition of canes at Mount Allison dates back more than a century. During Mount Allison’s early years, male members of the senior class were accustomed on Sundays and on ceremonial occasions to carry walking sticks and canes on campus.

The privilege of using a cane was intended to help distinguish male seniors from the juniors, the sophomores, and the freshmen. Although the tradition on campus has faded into history, Mr. Howard Alcorn (1901) presented Mount Allison with a ceremonial cane in 1930. This cane was to be passed from senior class to senior class at the graduation banquet with the name of each class president engraved on it. 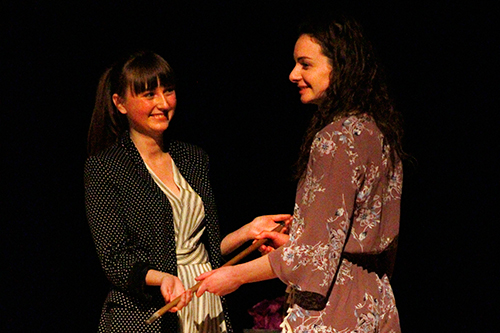 Unfortunately, Alcorn’s cane was destroyed in the 1941 men’s residence fire in which four students perished. The cane that has been used ever since was retired to the University Archives at this year’s Last Lecture. Bailey Fleming, the 2018 Grad Class President, is the last to have her name inscribed on it.

Barbie Smith (’75) was the first woman to be named a Grad Class President at Mount Allison. She was asked this year to help officially retire the cane. Her father, Donne Smith (’42), was living in the men’s residence when it tragically burned. He lost everything and arrived by train home to Shubenacadie, NS in pyjamas, slippers, and a borrowed sweater.

“I had no idea when chosen by my classmates as their Life Class President that I would be the first woman given this honour,” she says. “Twenty-two others have come after me.”

In 1975, the passing of the cane happened at the graduation banquet, just before the grad dance. Smith’s grandmother died that weekend, so she was unable to attend the banquet and receive the cane — until this year’s Last Lecture. The lecture is a new tradition at Mount Allison to recognize the graduating class. 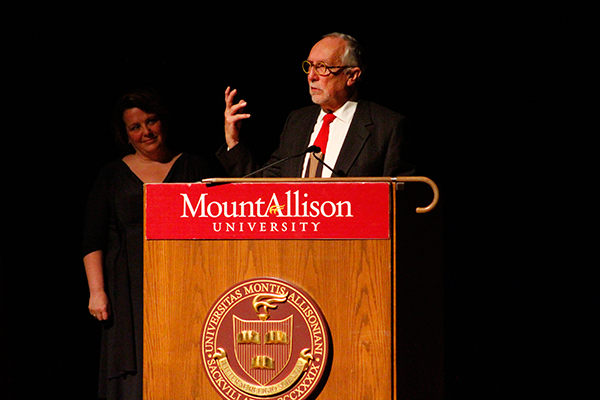 At the event, Smith passed the old cane to University Archivist David Mawhinney and a new cane was presented to the University by a generous alumnus, Dr. Garland Brooks (’60).

“One of the things I have always liked about Mount Allison is the manner in which the University keeps alive its history and traditions, like this passing of the cane ceremony,” Brooks says.

The new cane belonged to Brooks’s father, the late Rev. Garland C. Brooks (’34), from his time at Mount Allison. After he graduated, Rev. Brooks earned a Master of Arts in philosophy and psychology and a Master of Divinity and then entered the ministry. He remained active and involved over a very long life, even publishing a series of books on church history and theology, the last when he was 92. He participated in his final golf tournament when he was 91.

“Some of my last memories of my father are of him walking with his Mount A cane along the beach at Bay Fortune in PEI near the cottage he loved,” says Brooks. “Nothing would have pleased him more than that this cane should become the new symbol of the passing of the wisdom of the senior class to the upcoming generation.”

The new cane will be known as the Brooks Cane to future generations. Both canes will be on display on the first floor of the R.P Bell Library.