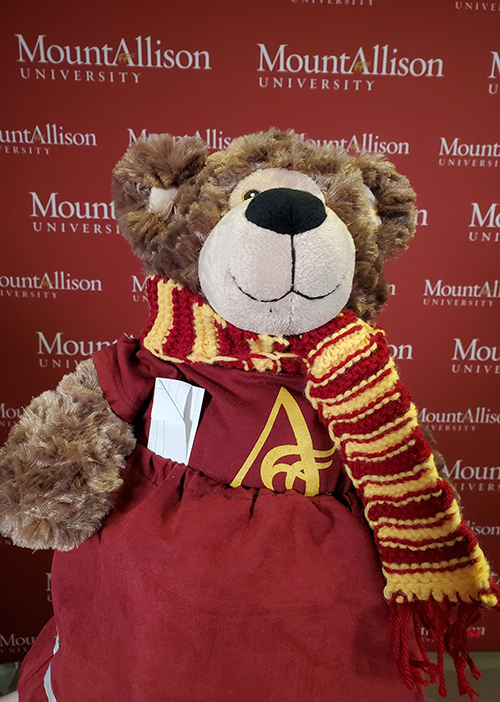 “There’s a new face on the Mount Allison campus this term. The University welcomed its own ‘Ambearrister’ — Maurina — as part of the First Nations Caring Society’s Spirit Bear program. Arriving on campus just before the holidays, Maurina, a stuffed bear, is named after Maurina Beedle, a Mi’kmaw Elder from Pictou, NS. She received her spirit name, meaning Girl of the Wild Flowers, in a ceremony held on campus with Elders from Unamaki and Elsipogtog First Nations communities.

Through the ceremony, the Elders found that our Maurina is a free spirit who loves children and being in nature,” explains Patty Musgrave-Quinn, Mount Allison's Indigenous affairs co-ordinator. “It was these characteristics that helped bring her namesake. Maurina holds the spirit of the Wi’klatmu’j, who are known as ‘The Little People’ in Mi’kmaw legends. The Wi’klatmu’j have been in Mi’kma’ki for thousands of years and are known as tiny tricksters with magical powers who work to teach us lessons.”

Maurina’s protector and warrior is the Eagle, which represents clarity and love.

With the First Nations Caring Society’s guidance and led by the University’s Indigenous Affairs Office, Maurina will embark on a number of initiatives and events throughout the year in support of reconciliation efforts. These include attending meetings of the University’s Indigenous Advisory Circle and campus events such as smudging ceremonies and gatherings in the University’s sweat lodge. Maurina, along with Musgrave, is also taking an introductory class in Mi’kmaq language with instructor Joan Milliea this term.