Uncovering the past | Mount Allison
Skip to main content
#MountiePride

Mount Allison students get rare opportunity to participate in archaeological dig in Pompeii
By: Aloma Jardine

There are few archaeological treasures that have captured the world’s imagination like Pompeii, from the moment it was rediscovered 270 years ago to present day, when teams continue the painstaking work of uncovering the lost city.

Preserved largely intact after being buried under Mount Vesuvius’s ash in the span of hours in AD 79, Pompeii has been invaluable in giving archaeologists a glimpse into life 2,000 years ago. 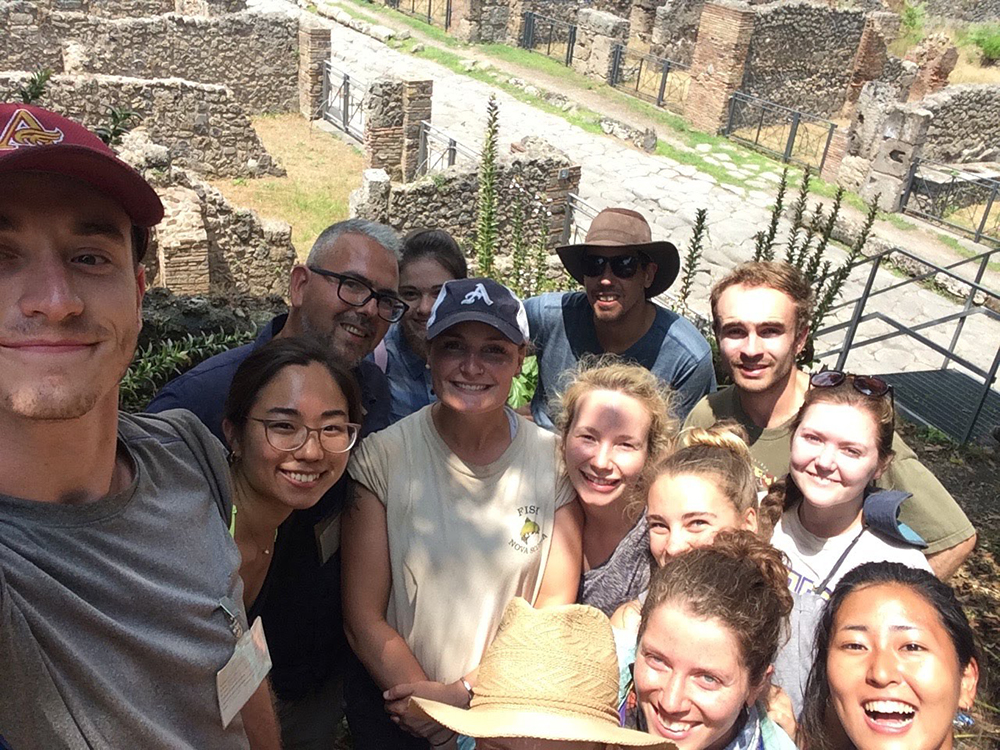 For the past two years, Mount Allison students have been assisting with a dig at this Holy Grail of the archaeological world. The Venus Pompeiana Project Archaeological Field School is a collaboration between Mount Allison, the University of Missouri (Dr. Marcello Mogetta, Department of Art History and Archaeology), and the Archaeological Park of Pompeii.

In 2018, 17 students — including 13 from Mount Allison — spent five weeks at the site under the supervision of Dr. Ilaria Battiloro, an associate professor in the Department of Classics at Mount Allison.

“The goal of the project is to resume the study of the Sanctuary of Venus in Pompeii, a prominent cult site,” Battiloro says.

The project has been supported by the President’s Research and Creative Activities Fund, the Crake Foundation, the Department of Classics Archaeology Funds, and funding from the Robertson family.

The Mount Allison team is the only Canadian team currently conducting an archaeological excavation in Pompeii.

“It is a big deal,” Battiloro says. “All the universities want to excavate there.”

The Mount Allison team is interested in what was on the site before the sanctuary was constructed in the first century BC.

“Pompeii was originally inhabited by another ethnic group called the Samnites, so we are excavating the layers below the Roman temple to understand what the site looked like before the construction of the sanctuary itself,” Battiloro says. “In investigating the places below, we are contributing to the pre-Roman history of Pompeii.”

Students are involved in all aspects of the research — from the actual excavation to processing and analyzing artifacts to working in the pottery lab — and attend lectures each day during the for-credit program.

“The experience the students get is quite intense,” Battiloro says. “They can gain a very clear idea of what archaeology is and what an archaeologist does.”

Battiloro says the students benefit from being part of the lively international work environment at Pompeii, which includes scholars from all over the world; from the proximity to other archaeological sites and museums; and from being exposed to a new culture and language.

Kaoru Yui (’17) participated in the program in 2017 and 2018 and is currently working toward her Master of Art Conservation at Queen’s University, the only such program in Canada.

“The first summer I went it made me more sure about going into archaeological conservation,” she says. “The first time I saw the site I had this moment — it was a feeling of awe, looking at a city which was used by people who lived 2,000 years ago. Touching the things there, I felt I was connected to them — it was amazing.”

But Yui says the biggest lessons came from working closely with others for long hours in not always ideal conditions and with language and cultural differences.

“I learned the importance of communication and acceptance,” she says. “The whole experience showed me what it is like to go outside my comfortable space.”