Lara Murphy (’93) has always been known for seeing things differently.

“As a kid, I always had a curiosity about how things were built and my family was very encouraging,” she says.

That curiosity grew, with Murphy, a history and political science major, starting her own business, Handy Student Maintenance, at the age of 16.

Fast-forward 30 years and she is now co-founder and director of strategy at Calgary’s Ryan Murphy Construction (RMC), an award-winning, nationally-recognized construction firm, and one of the only construction firms in the country run by women.

“I had started a small firm in Calgary when I moved there in 2005,” explains Murphy. “I got a call one day from a Mount A friend looking for someone to do some work in Banff on a retail store. I took the job and met Karen Ryan on site. We were the only two women and we got to know each other quite well. From there, we worked to start Ryan Murphy Construction.”

Established during the 2008 recession and working through economic ups and downs, the RMC team has generated an incredible 1,973 per cent growth in the last nine years. With the company motto, “Small enough to listen, Big enough to deliver,” RMC has delivered on commercial construction projects in a variety of areas including fitness, health care, seniors’ facilities, and retail fit outs.

Murphy’s interest and skillset in construction was already well established before her move west. Along with running smaller firms, she also renovated and remodeled a century-old home purchased in New Brunswick following graduation.

But she says the idea behind her present award-winning business started with a conversation at Mount Allison. 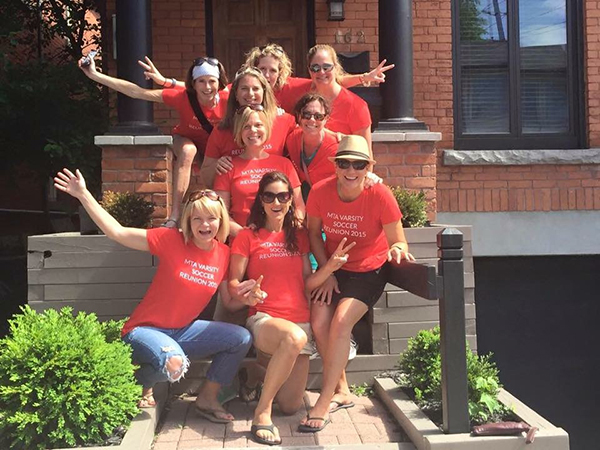 “I was walking on campus after practice with Graham Chandler (’87), one of my soccer coaches with the Mounties,” says Murphy. “He said, ‘Lara, have you ever thought about a career in construction? I can see you running a big business.’”

Murphy says that campus conversation changed the trajectory of her life.

“Until then, the thought had never crossed my mind, even though I was running a business every summer in my hometown of Saint John,” she says.

Murphy says many lessons she learned in the classroom and on the pitch at Mount Allison have carried over to her business life.

“Learning how to lose with grace is one of the best skills I’ve learned, in business and in sport,” says Murphy. “You will lose more than you win, but recognizing this and, as Michelle Obama says, learning how to ‘fail up’ have been essential for me both personally and professionally.”

Murphy has contributed much more than construction to her adopted hometown. She is also an active volunteer for a number of organizations and community groups.

“I think it’s important to give back to your community. Calgary’s given so much to me,” says Murphy. “I serve on two boards for non-profit organizations and RMC sponsors Fast & Female events and supports cerebral palsy research. I also try to do as many speaking engagements as I can, for entrepreneurs and groups like the Girl Guides and the Boys & Girls Club. The construction industry still doesn’t have many women working in it. It’s important for young girls to look at all their options and not limit themselves.” Lara Murphy (’93) has always been known for seeing things differently.