When the waters of the North Atlantic closed over his head, Stanley Chambers would have been forgiven for believing that moment was his last.

Chambers was returning home, wounded, on the Hesperian in September 1915. He had enlisted a day after the First World War began in August 1914. By April 1915, he was in the thick of the Second Battle of Yprès in Belgium.

Born in Truro, NS, Chambers attended Mount Allison for a single year in 1910-11, but remained connected with the University. He returned to Sackville in December 1915 and recounted his experiences at the front during an event hosted by the Women’s Civic League and reported in the Dec. 3, 1915 edition of The Argosy.

After 11 days in Yprès, Chambers was wounded when a shell exploded next to him, burying him in dirt and mud.

“I managed to claw my way out, and started to run back, but as I went, my eyesight grew fainter and fainter and before I had gone a hundred yards, I was stone blind,” Chambers said.

He could go no further, but he could hear another wounded soldier moaning nearby. 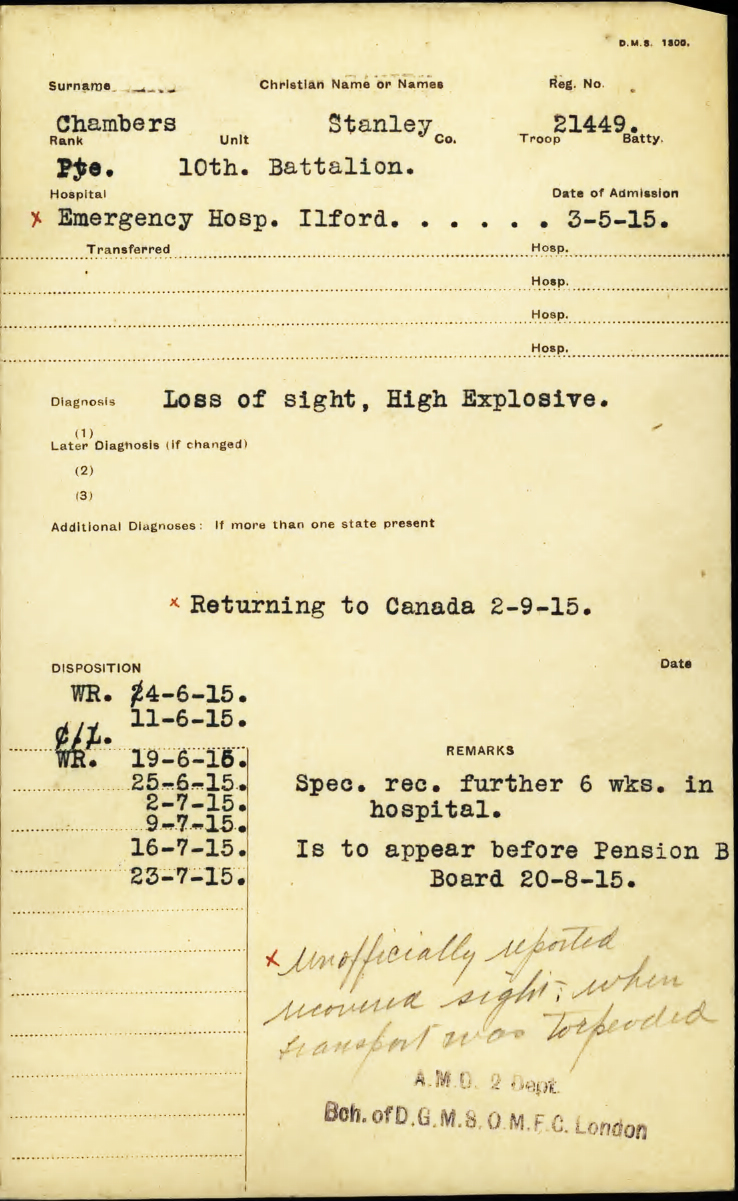 “I crawled toward the sound… He said he had some shrapnel in his back. I asked him if he could see, and he said, ‘Yes.’ ‘Well,’ I said, ‘I have gone blind, but I am all right otherwise, so I will carry you back, and you can tell me where to go.’”

Chambers carried the wounded man for at least five miles — and for more than seven hours — to get help.

Chambers was shipped back to England, but four months later he was still blind and was sent home. On his second day at sea, the Hesperian was torpedoed and he was thrown into the water.

“I went down with the rest and when I came up — I don’t know how or why — I could see the sinking Hesperian and the boats about me,” he recounted.

“He didn’t make a point of talking about it, but if the subject came up, he didn’t mind telling his story,” he says. “In his version the Germans were both the good guys and the bad guys — they took his vision away, but then they gave it back when they torpedoed his ship.”

“He had perfect vision. I don’t even remember him wearing glasses,” Schellenberg says.

After he returned to Canada, Chambers spent a year with the military touring through Canada and the U.S. on a lecturing tour and attended machine gun school where he was made captain. In 1922 he and his wife, Lillian, and their two children, Helene — Schellenberg’s mother — and Stanley Jr., emigrated to the United States and settled in California where Chambers joined the staff of the Scripps Institution of Oceanography as a research scientist. Scripps’ research on ocean currents and temperatures contributed to the development of long-range weather forecasting, key in planning the D-Day landings during the Second World War.

“He was always known as Captain Chambers there because of his time in the military,” Schellenberg says. “He was not an oceanographer by training, he was a chemist. I remember there was a long pier at Scripps and he would go out every morning and take the temperature of the water at certain depths. I used to go with him sometimes and it was really fun for a kid to get to do that.”

Editor’s Note: Our thanks to associate librarian Elizabeth Millar for sharing her research on Stanley Chambers with the Record.