In the spring of 2012, Dr. Vett Lloyd decided to do a little scientific digging into a problem with a very personal connection.

The Mount Allison biology professor had contracted Lyme disease from a tick bite.

“When I got better I realized how little was known,” she says. “If there had been more knowledge out there, I wouldn’t have been told there were no ticks in New Brunswick and no Lyme disease in New Brunswick. I just wanted to stop other people from going through the hell that I went through.”

Her “little side project” has grown exponentially over the past five years, resulting in the launch this past May of the Mount Allison Lyme Research Network (LYRN), made up of 14 Mount Allison researchers from disciplines as varied as English, psychology, chemistry, and biology.

“It’s taken over not only my lab but a good chunk of the University,” Lloyd says. “In the world of science, it is phenomenal in five years to go from, ‘Let’s try this as a side project,’ to creating an interdisciplinary research network that has attracted national funding.” 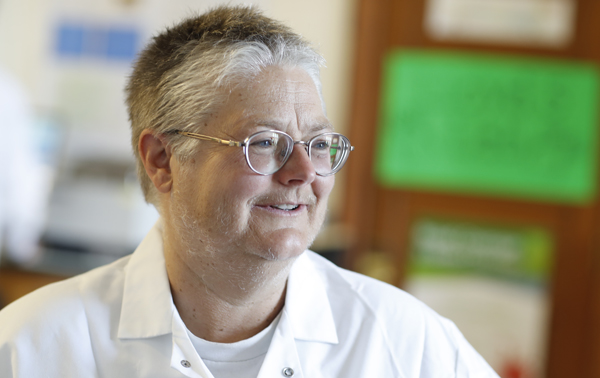 “The problem starts with bacteria in ticks, but once it gets into people it is a social problem, and a healthcare problem, and a problem for patients, their families, and communities,” she says. “That is the cool thing about Mount Allison — we’re small enough that we talk to each other and people get engaged and offer their ideas and expertise. Long before it officially existed, the research network existed in reality.”

Lloyd has worked with Dr. Odette Gould in psychology on how Lyme disease patients feel about the struggle to get treatment in Canada, with Dr. David Lieske in geography and environment on tick mapping, and with Dr. Stephen Westcott in chemistry on new ways to kill the bacteria that causes Lyme disease.

A number of students worked with Lloyd and other professors this past summer on tick and Lyme disease-related projects, in many cases with breakthrough results. Much of Lloyd’s work is generating brand new information on ticks in New Brunswick, the Maritimes, and Canada. She has documented the presence of a type of tick that causes people and animals to develop meat allergies, shown that ticks in the province are hybridizing — with black-legged ticks mating with local ticks to create insects that are possibly both more cold-tolerant and aggressive, and documented the presence of European ticks in the Maritimes that carry a strain of Lyme disease that is not recognized by the diagnostic blood test currently used in Canada.

During tick season, there is hardly a week that goes by without Lloyd fielding one — or several — media calls, in addition to an average of a call a day from someone who has been bitten by a tick.

“I’m not a physician and I can’t help people directly, but I have information,” she says. “I have knowledge that can help people and in the broadest sense, that is what universities do. We are part of the community and we work with the community to try to solve community problems.”