Alumni return to campus to celebrate more than 50 years since graduation
By: Melissa Lombard 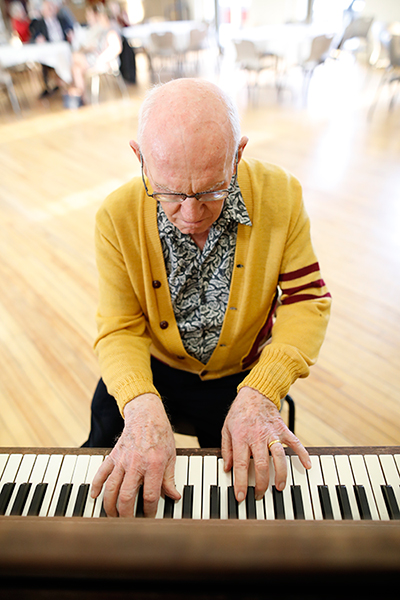 As the sing-along began at the ‘50s Decade Reunion, Harry Currie (’53) quietly took a seat at Music student Max Keenlyside’s (’17) homemade piano, fittingly pieced together from two pianos from the 1950s. Currie, a Music graduate, casually played a tune before Keenlyside continued the evening’s entertainment.

“I’m not much of a piano player,” he says. “I was mainly woodwind, a singer, and a conductor.”

After finishing his Music degree, Currie says his life was broken up into three parts. At 22 he became the youngest-ever military director of music in the history of the British Commonwealth, then worked in London, Australia, and New Zealand in the music business as a lead and vocal back-up, and then became a music educator and journalist. Notably, he had the opportunity to back Frank Sinatra and The Beatles.

“This life has been very fascinating,” he says. “If it hadn’t been for Mount Allison, the rest of my life wouldn’t have happened.” 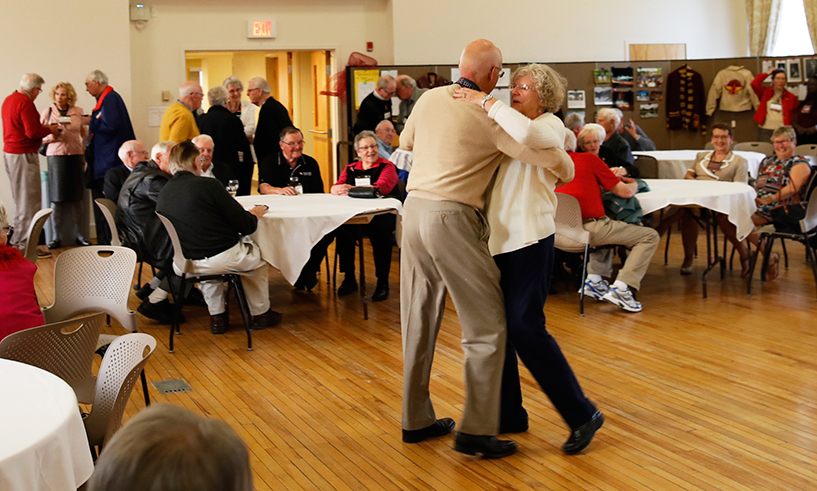 Smith did research in the yearbooks, the Record, and the Argosy to find photos and memories from that decade. She even had the returning class members’ graduation photos blown up and posted around the class lounge.

The weekend’s special festivities included a dinner and sing-along in Tweedie Hall, a private viewing of Mary Pratt’s (’61) exhibit at the Owens Art Gallery, and the first annual presentation of the Charles Frederick Allison Pin for alumni who graduated more than 50 years ago.

“It was a nice excuse for me to come back again this year,” says Smith. “I have probably made more friends coming back to Reunion and being a part of the Alumni Board than I did during my time at Mount A.”

Currie says it was a wonderful opportunity to reconnect with old friends.

“To me, that’s the greatest part of this,” he says. “I would never be able to find them again if I were looking for them on my own.” 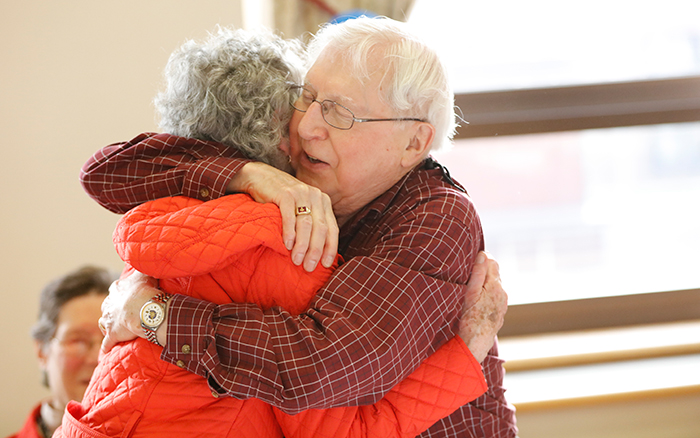 Ian Johnstone (’55) had been back for Reunion before, but this time he met up with a friend he had not seen in more than 60 years, Audrey (Goold) Coleman (‘56).

The first annual Charles Frederick Allison Pin Presentation honoured those who returned to campus after more than 50 years with a special pin, as well as a chocolate and champagne reception.

At the presentation Elaine Smith (’56), proudly sported her garnet and gold blazer with her ice hockey and class crest, which she says she regularly wore on campus with bobby socks, saddle shoes, and reversible plaid skirts.

“I came here when I was 16 and left when I was 20. Those were such important, formative years. I love Mount Allison…that place is part of me. It is nice to have a pin to wear to remind me of that,” she says.

To each of us will come back again and again, things which we would be shy about putting into words, perhaps because no one else can understand how we feel about them. We don’t understand it ourselves.

The sunlight on the water over by Beausejour, - the big white clouds sailing up the Bay of Fundy, like the billowing white sails of the old clipper ships that were the glory of these provinces, - the kindly folk of this good town, and their gracious hospitality to young people far from home, - the little yellow August flowers, dancing in the Tantramar wind, - the exquisite woodsy fragrance of a little bunch of Mayflowers on a spring day,- the spot on the campus where you said goodbye to a boy who went to war and didn’t come back, - the coloured lights of the campus Christmas tree glowing through the falling snow, - the voices of the senior class singing in their last chapel, -the voice of the President conferrring a degree, the ache in your throat and the blur in your eyes as you turn to look back at the old hill for the last time.

“Sentiment” you say? Certainly! Subtract from life the things that men and women love today, and hold in tender recollection tomorrow - and what possible meaning or worth could there be in what is left?