Mount Allison's magazine is one of the longest-standing alumni publications in the country
By: Laura Dillman Ripley

The Mount Allison Record is marking its 100th anniversary this December, making it one of the oldest alumni publications in Canada. 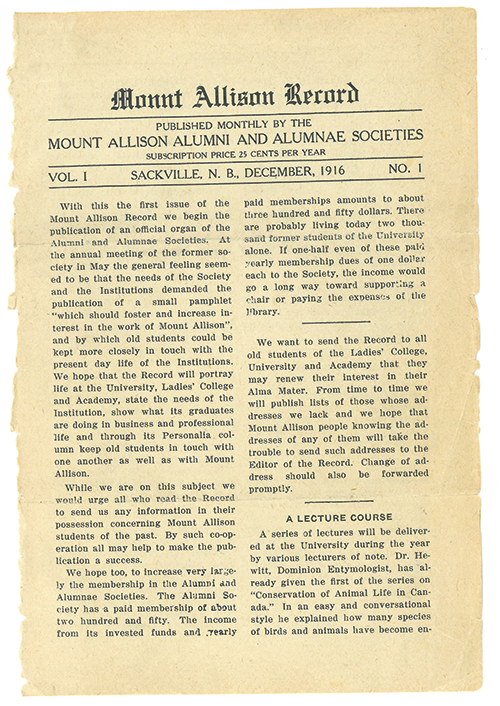 The first issue of the Record stated the following goal:

“We hope that the Record will portray life at the University, Ladies’ College and Academy, state the needs of the institution, show what its graduates are doing in business and professional life and through its Personalia column keep old students in touch with one another as well as Mount Allison.”

While much has changed over the past century, the importance and use of the Record as a communications tool remains imperative to the Mount Allison alumni network.

“The Record is our way of sharing and celebrating the accomplishments of Allisonians around the world, as well as University news and events,” says Record editor and alumni director Carolle de
Ste-Croix (’90). “We know it plays a key role in our strong alumni connections.”

For University Archivist David Mawhinney, the Record has been an invaluable tool in assisting researchers.

“Looking at Mount Allison’s history through publications like the Record, one can see that this is a university that was very aware of its past and, at the same time, continuously looking forward,” he says. “Themes such as the education of women, the rise of student activism, and the importance of clear financial management and support were evident even 100 years ago.”

Mount Allison’s commitment and attention to these and other topics have been made apparent over the decades with events and news covered in the Record and other publications. Here are just a few examples: 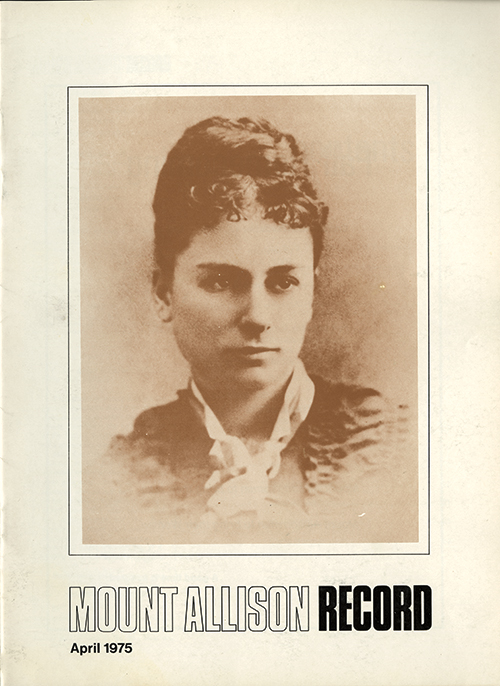 The education of women played a particularly important role dating back to the establishment of the Ladies’ College in 1854. One hundred years later former residents of the College were invited back for a grand reunion. The Centenary Celebration — Education of Women at Mount Allison included special events during the summer of 1954 (Winter 1953 Record).

Grace Annie Lockhart (1875), the first woman in the British Empire to receive her Bachelor’s degree, has also been celebrated for her accomplishments at her alma mater. To mark the centennial of her graduation, the Alumni Federation established scholarships for female students, which included commemorative medals celebrating this first in Mount Allison — and Canadian — history. The anniversary of her passing was also celebrated this fall with a gathering at her gravesite in Tryon, PEI. 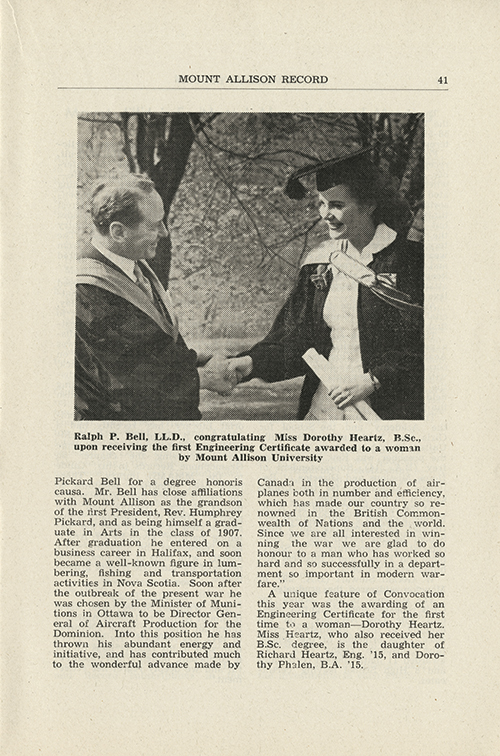 Mount Allison’s first female to graduate in engineering — Dorothy Heartz (’44) — was highlighted in the magazine and the University also celebrated the largest class of female students in engineering in 1976 with five graduates.

The role of women in higher education of course continues to be a celebrated hallmark of Mount Allison today, as evident in the pages and web features of the Record and many other University publications.

While many new facilities were completed due to a growing student population, other buildings were replaced for different reasons, most notably fires and the need for new resources.

“Fires played a significant part in Mount Allison’s history over the past century, which, while unfortunate, made campus renewal an essential component of the University,” says Mawhinney. “Many of these were documented in the Record, giving a first-hand account of the resilience seen across the campus and supported greatly by Mount Allison graduates.”

In 1941 the campus experienced a significant loss with the fire in the second men’s residence, which took the lives of four students. This tragic event paved the way for the building of Trueman House in 1945, named in honour of George Trueman, Mount Allison’s sixth president. 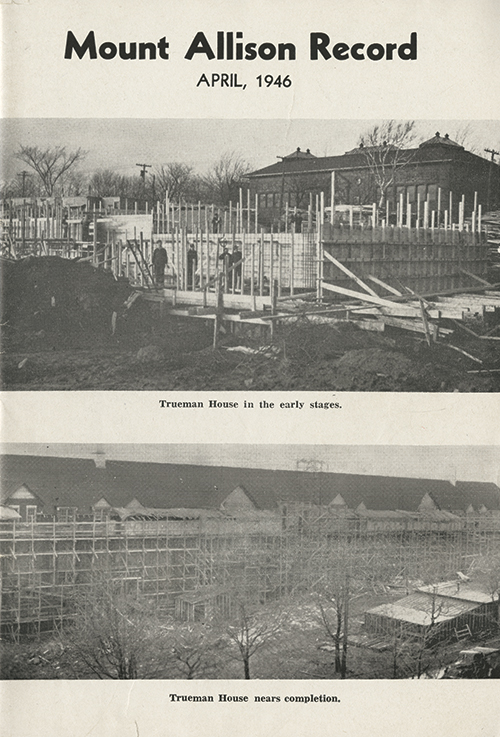 Officially opened on Sept. 18, 1946, Trueman House was one of many post-war projects completed with the help of alumni. Numerous fund raising campaigns, communicated in the Record, helped to make these essential projects a reality while helping to keep the University in good financial standing.

“Support from our alumni, as referenced in the Record over the decades, has always played a key role in campus projects, and continues to today,” says de Ste-Croix. “Looking back at the various campaigns gives some insight on the importance philanthropy and communications with our graduates has played in our University’s history. Alumni have played a strong role from the beginning, from providing consequential financial support to being some of our most important recruiters, sending their children, students, and neighbours to Mount Allison.”

The ‘building boom’ continued on campus in the 1960s and ‘70s, helping to accommodate a growing number of students, thanks in part to this support. These include many buildings still used today including the R.P. Bell Library, the Crabtree Building, the Marjorie Young Bell Conservatory of Music, Convocation Hall, as well as many residences and facilities — all celebrated accordingly in the magazine.

A Record Who’s Who

The staff and contributors of the Record have included many notable faces both from Mount Allison and the wider community. Alumni, staff, and faculty members all made important contributions to the publication since its establishment. (See “Allisonian Archives” in this issue for highlights about some of the editors over the years).

Along with regular contributions from the University and Alumni Presidents, students, faculty, staff, and alumni all had — and continue to have — a voice in the magazine. One of these voices included long-time advisory board member the late Alex Colville (’42, LLD ’68). 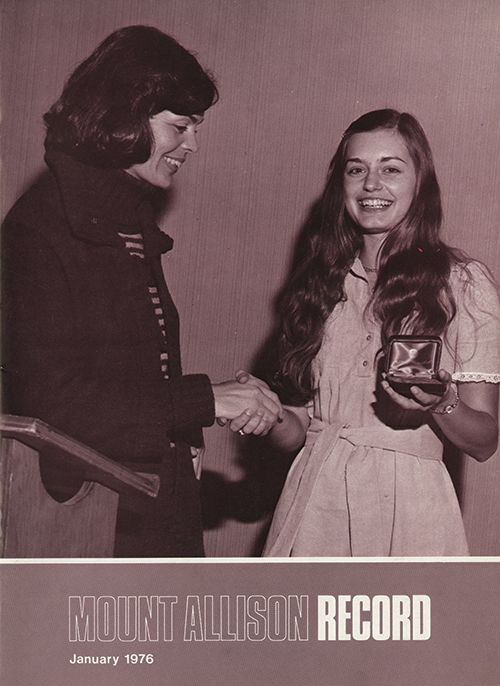 One of Canada’s most noted contemporary artists, Colville served on the magazine’s advisory board for a number of years as an alumnus and faculty member, leading the redesign of the cover in the 1960s.

“To have someone with the calibre of Alex Colville involved in your alumni magazine speaks to the special kind of place Mount Allison is,” says de Ste-Croix. “We have been so fortunate to have this insight and talent help shape our magazine over the years.”

Of course, the contributions of Mount Allison alumni and friends through alumni news updates, in memoriam submissions, and class notes have remained vital to the publication. While format and style has changed over the years, these components of the Record have remained important ones for the Alumni Office and the University as a whole.

The current staff of the Record, a small group made up of University Advancement staff members, a dedicated Alumni Board, and key guest contributors, such as the University archivist, feel indebted to those who came before us. We thank you — our Mount Allison alumni — for celebrating 100 years of publication with us, allowing us to share your stories and updates, and University news, while hopefully providing some information and entertainment along the way. As we head into the second century of publication, including this online integration, we hope you will continue to be involved and engaged in your alma mater.

1. The first issue of the Mount Allison Record, December 1916

2. Grace Annie Lockhart makes the cover of the April 1975 issue in honour of the centennial of her graduation