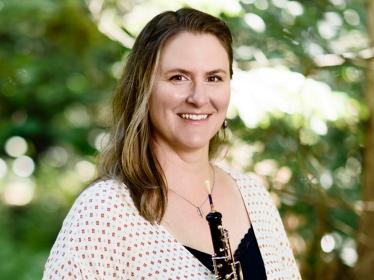 Christie Goodwin is currently acting principal oboist and has been a core member of Symphony New Brunswick since 2011.  She is a founding member of the Ventus Machina woodwind quintet and oboist of the Niagara Winds woodwind quintet based in Southern Ontario.  She held the position of principal oboist of the Niagara Symphony until 2012 and has previously held principal and section-leader positions with the Kitchener-Waterloo Chamber Orchestra and Korean Canadian Symphony Orchestra.  Christie has been featured with orchestras both as an oboe and English Horn soloist on multiple occasions and has appeared as a freelance musician in ensembles throughout Southern Ontario and the Maritimes.

Originally from small-town Alberta, Ms. Goodwin completed her Bachelor of Music at the University of British Columbia, the Artist's Diploma program at the Glenn Gould School of the Royal Conservatory, and in the fall of 2020 completed a post-graduate Diploma in Arts Management at Queen’s University.  Christie has taught oboe at the University of Moncton, instructed and guest-lectured at Mount Allison University and taught private lessons from her home studio in Dieppe for many years.  She acts as oboist, co-ordinator, administrator, and project manager for the Ventus Machina woodwind quintet, who released their second full album, “Roots” in February 2020 under the Leaf Music label.